Chevrolet introduced the second generation of the Cruze on the U.S. market in 2016, and, in 2018, it brought a refreshed version for it in both shapes: sedan and hatchback.

Chevrolet decided to cut the development costs for the Cruze and took almost the entire Opel/Vauxhall Astra K plans in the U.S. Even though it took the bow-tie brand another year to adapt the product for the American market, the result was well worth it. More than half of the Cruze's customers were new to the Chevy brand, and the sedan version had its fans. Moreover, the slow sales of the manual gearbox convinced GM to ditch them from the list and offered the Cruze only with automatic transmissions, fitted as standard, on the 2019 model-year.

Along with the facelift, the Cruze received a new front fascia that sported a broad lower grill in the lower bumper. It was flanked by a pair of side-scoops, which hosted the foglights. On top of that, the new headlights featured new DRLs. The profile revealed new wheel options for the Cruze, while at the back, the carmaker introduced new LED taillights.

Inside, the carmaker added a standard 7" touch-screen display for the infotainment unit. A SiriusXM Satellite radio was on the options list. Also, depending on the trim level, the carmaker added keyless entry and push-button start. The base LT level was also enhanced with new amenities. 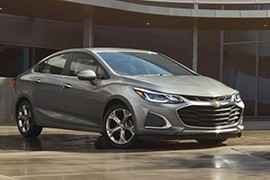