3 Your Bugatti or Mine? Kylie Jenner and Travis Scott Drive Her Bugatti Chiron on Their Date

4 Bugatti's Gift Guide for the Holidays Is Here, Picking a Great Present Just Got Simpler

5 The Bugatti W16 Mistral Has Made Its Middle Eastern Debut

Bugatti Type 57 was one of the most famous vehicles built by the famous French car-maker before WWII. It was introduced as an S-version and, later on, the manufacturer added a supercharger and renamed-it SC.

After winning races around the world, the Bugatti established itself as a car-manufacturer able to produce the finest cars built for speed and endurance. “Le Patron” from the Molsheim factory understood that a lower center of gravity improves the cornering speed. In 1934 Bugatti launched the 57S version, where the S came from the “Sourbaisse”, which means "lowered".

A curved chassis allowed the car to sit lower to the ground and allowed the coachbuilders to create sleeker bodyworks. The long hood, curved fenders, and small cabin made it a performance car that was hard to catch on those times. Some 57S were custom-built, but some had bodies from the Bugatti's Molsheim factory.

The interior was fitted with two seats moved far in the back, just a little bit in front of the rear axle. To do that, the steering column was long and the instrument panel was installed on the other side of the dash panel.

The engine featured a double overhead camshaft (DOHC) with three valves per cylinder (one intake and two exhaust) that offered 135 hp. It was mated to a 4-speed manual gearbox. 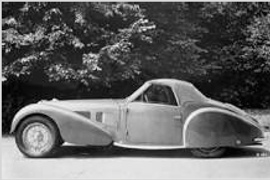