The Bufori MK II entered production in 1992, replacing the MK I model.

The first series was fitted with a 1.8-liter boxer engine, followed by a 2.2-liter boxer mounted in the seconds series. The available engines were rear mounted and two types of transmission were available: a 4-speed manual and a 3-speed automatic. Also the car was fitted with solid disc brakes for the front axle, drum brakes for the rear and independent 4-wheel suspension. The 100 km/h (62 mph) mark on the speedometer was reached in 9.3 seconds for the first series and 8.5 seconds for the second series. Also, their top speed was 160 km/h (99 mph) and 185 km/h (115 mph). Interior was simple, standard model having leather upholstery, electric windows, convertible top with fold-back hood and cover, classic brass instrumentation and AM/FM stereo cassette radio. The most interesting feature was it’s custom-tailored bodywork. The automaker literally took measurement of the owner’s body to make the car fit him like a glove. 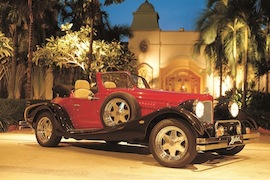