When BMW decided to enter the car industry, it bought the struggled Eisenach car factory in 1928 where the British car Austin 7 was produced under license.

The Eisenach car company sold the licensed Austin 7 under the Dixi name for the market. It was more of an assembled car from spare parts imported from the U.K. In 1927 the car was adapted for the European roads, with the left-hand-drive position. This is how the car was found by BMW when it bought the factory and it named it BMW Dixi.

In 1929, BMW installed Bosch dampers on the car and named it 3/15 where 3 was the taxation category and the actual horsepower. The car was available as a coupe, roadster and tourer. Also, some vehicles were sold as chassis to external coachbuilders.

One of the biggest problems of the car was that everything was measured in Imperial units and most workshops had only metric tools. BMW decided to change that and, in 1929, when it started to build the parts, it started to change the fasteners into metric. The first 3/15 was also named as DA1, which meant German Version 1. Further developments followed on the DA2, DA3 and DA4 models.

Under BMW management, the car received four-wheels brakes, unlike the Dixi who had only rear brake wheels. The engine was modified to increase its maximum power output to 18 hp. There was also a sports car named Wartburg, but it was discontinued when the Great Depression started in 1931. BMW discontinued the 3/15 in 1932 when the license with Austin expired. 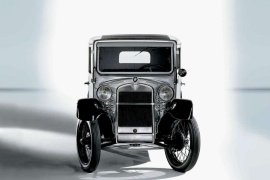 1 BMW M Asked Its Fans Where They Would Go With the Concept XM, It Backfired Spectacularly

3 BMW 8 X Jeff Koons Heading to Australia in Q3, Only ONE Copy Will Be Sold There

5 The 2024 BMW 5 Series and 7 Series Will Drive Themselves, There'll Be No Beta Testing