The 2020 Bentley Bentayga Speed took the crown for the world's fastest SUV from its brother Lamborghini Urus by just a half of mile speed difference (0.8 kph).

The Speed version for any Bentley was the faster one. So was the Bentayga, which received few updates so it can outrun the regular version and its brothers. The Urus, the Bentayga, and the Porsche Cayenne were built on the same platform. But not all of them had a W12 engine under the hood.

For starters, the Bentayga Speed had a few details when compared to the standard version. Its front bumper and apron were different. To create a sporty look, the car featured dark-tinted headlights, side sills, and a longer roof-spoiler on top of the tailgate. Under the redesigned apron, the Bentayga Speed featured an Akrapovic exhaust. The “Speed” badge was shown on the front door panels. A unique design for the 22” light-alloy wheels was adopted to fit with the sportiest version of the Bentayga.

Inside, there was a mix of luxury and sportiness. It looked like a grand-tourer SUV. The center stack was the home of the infotainment system and another 26 buttons and knobs. Next to the gear selector, there were some other buttons, just in case those 26 were not enough. A carbon-fiber trim was used for the dashboard and the rear center console.

Under the hood, there was an upgraded version of the twin-turbo, 6.0-liter engine. It was upgraded by 26 hp over the regular model with the same engine. 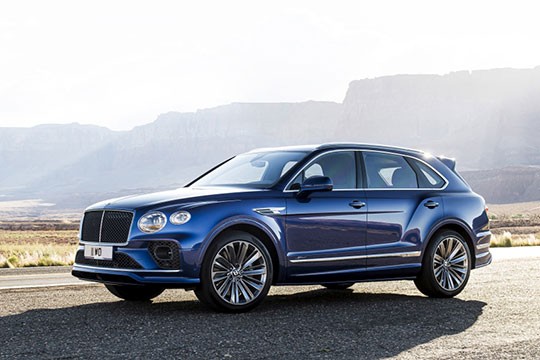