Aro introduced its brand new Muscel M 461 model in 1963, designing it for off-road use.

Also nicknamed 'the Carpathians Aurochs', this mid-sized sports utility vehicle was developed starting 1961 and introduced two years later on a completely new platform (until then, all Aro models were based on the GAZ 69 russian chassis). From 1963 to 1965, the Aro M 461 underwent no less than 81 modifications in order to suit the customers' needs. It model was also used for several international expeditions, including the '1971 Trans-African Expedition', and was discontinued in 1975 due to the introduction of the new ARO 240. 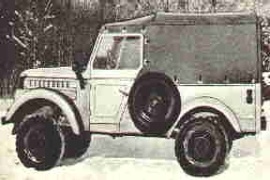 2 Romanian ARO to Be Reborn

4 GM Will Not Move Employees from Detroit