Former glory brand, winner of two Monte Carlo Rallies, the World Rally Championship and even Le Mans in 1978, the Alpine brand was resurrected by its owner, Renault, after more than 20 years since the last car wearing the nameplate rolled out of the factory.

The new A110 generation is based on the same principles as the original one: a lightweight body, rear-engine, and rear-wheel-drive. It is offered in three variants: Pure, Legend and S. While the first two variants are addressed more to car enthusiasts, who will maybe visit a race-track, the S-version is lightened, more powerful and track-oriented.

The engine deliver 252 hp for the Pure and Legend and 292 hp for S version. All three have the same 7-speed dual-clutch gearbox.

The total length of all three versions is 4.18 m (13.7 ft), while the S variant has a 1.24 m height (4 ft), 1 cm (0.4 in) lower than the Pure and Legend. Inside the cabin, everything is race-oriented. The steering wheel has a starter button, the dashboard features a TFT display, which can show various information for a track-day and, most importantly, a telemetry system with its own touch-screen on the center console. The same display can be used for the navigation and infotainment system. The EASY LINK system is fitted as standard on all Alpine 110 variants. 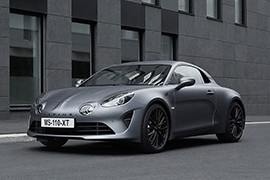 5 Alpine Unveils A522, the Latest Title Contender for the 2022 Formula 1 Season