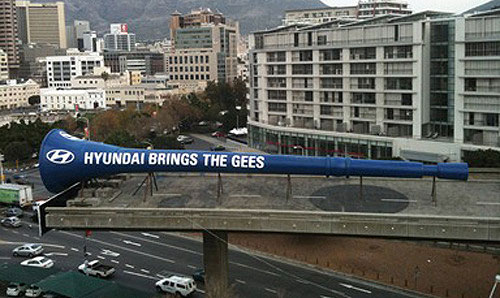 Oh, no, they really had to do this... After our ears got trashed by the now two-week long, relentless Vuvuzela sound, after our brains have become a gelatinous paste as a result of the billions of bees invading our homes from the screens every day, three times a day, after all of that, Hyundai had to come up with this...

Meet the world's largest, biggest, longest, loudest Vuvuzela. Created by the South Korean manufacturer, who, by the way, is the official car supplier of the 2010 FIFA World Cup in South Africa, the 114-foot-long... tube sits on top of an unfinished bridge in Cape Town.

From there, as a game, any game, is about to start, the Vuvuzela releases its millions of bees on the poor Cape Town residents' heads. Yes, you read it right, the damn thing works. You can find the proof in the video below.

The Vuvuzela has been placed there by Hyundai's advertising agency The Jupiter Drawing Room, to be the epitome of Hyundai's “Bring the Gees” campaign.

If, by accident, you have been living in a secluded cave somewhere on the Moon, the chances are you don't know what a Vuvuzela is. Described by South Africans as football's beautiful noise, the Vuvuzela is a brightly colored, meter long trumpet. A trumpet which, South African says, sounds like an elephant.

Listen to the one below (which, by the way, sounds more like a ship coming into port). Does it sound like an elephant? Open your TV and listen to tens of thousands of Vuvuzela being constantly blown throughout any given game. Do they sound like elephants?