1 VW May Use Porsche's Panamera Platform for Other Brands

3 VW Gives in to Mexican Union

5 VW May Indeed Go for Karmann
Up Next

Lancia Ypsilon ELLE to Be Exhibited at Frankfurt 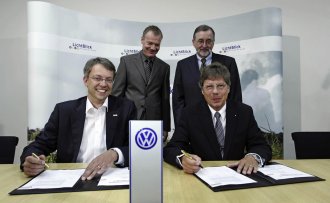 Volkswagen and energy supplier LichtBlick yesterday signed an agreement in Salzgitter, with the German car manufacturer to produce the so-called "EcoBlue" CHP (combined heat and power) plant powered by gas engines from Volkswagen. Additionally, LichtBlick will start marketing the plant as "ZuhauseKraftwerke", Volkswagen said in a release.

"Under its BlueMotion Technologies brand, Volkswagen is already developing and producing innovative, environmentally effective technologies. The partnership with LichtBlick is further proof of our engineers' technical expertise. Volkswagen will be contributing its experience in the production of standard automobile engines, which has been tried and tested in millions of units, and its volume production capabilities to this cooperation," said Dr. Werner Neubauer, Member of the Board of Management of the Volkswagen brand with responsibility for 'Components'.

Volkswagen says the new plants will be integrated in the future in LichtBlick's network and form a major power plant which, according to preliminary statements, is going to be the largest of its kind in Germany. Specifically, the new plant will have an output of 2,000 megawatts, which means it could have the same capacity as two atomic power plants.

"This project will also help to secure long-term employment at our Salzgitter plant and other Group facilities," Neubauer added.

"By marketing the ZuhauseKraftwerk, which allows decentralized, flexible power generation, LichtBlick will be ushering in a new era of smart energy supply. As Germany's largest independent energy supplier, we know how power and gas markets work and how to organize a successful sales system. In Volkswagen, we have found the ideal partner for our scheme," said Dr. Christian Friege, CEO of LichtBlick.