4 After Surviving a Wild Ride on Mars, NASA Ingenuity Takes to the Martian Sky

Otilia Drăgan
While all eyes are on the billionaires making their way to space for the first time in history, the U.S. Space Force (USSF) continues to develop its strategy for future operations in space. This time, a groundbreaking solar-thermal propulsion system, powering the innovative Scorpius spacecraft, could disrupt spaceflight as we know it today.
6 photos

A newcomer in the space industry, Rhea Space Activity (RSA) has been selected for a Phase I, Small Business Innovation Research (SBIR) 2021 Space Force Pitch Day award, to develop a game-changing solar-thermal propulsion system for a future USSF spacecraft.

One of USSF’s goals is to go beyond geosynchronous orbit. Until now, the main options were either chemical propulsion, which has a limited payload capacity even though it makes up for it in speed, or electric propulsion that can support a much bigger payload, but delivers it in months or years.

The Defense Advanced Research Projects Agency (DARPA) has been working on an alternative to this, through a program known as DRACO (Demonstration Rocket for Agile Cislunar Operations). This third way, nuclear-thermal propulsion, would offer high efficiency and increased payload, but it comes with the inherent risks of nuclear reactors.

Scorpius will use origami-inspired solar reflectors with an unfolding design, and a ThermaSat+ propulsion system (that’s being developed by Howe Industries), to heat a tungsten block, which will then vaporize propellant at high temperatures. This is how the spacecraft’s propulsion will be generated, allowing it to reach further, faster, and with enough room for larger payload. Plus, the solar reflector will also double as a communications antenna that can redirect solar energy to generate power for the spaceship’s subsystems.

Scorpius is set to become an essential asset for offensive and defensive communications operations. Some of its missions could include transporting satellites from low Earth orbit to the geosynchronous belt, removing space debris and patrolling strategic space areas of interest for USSF. 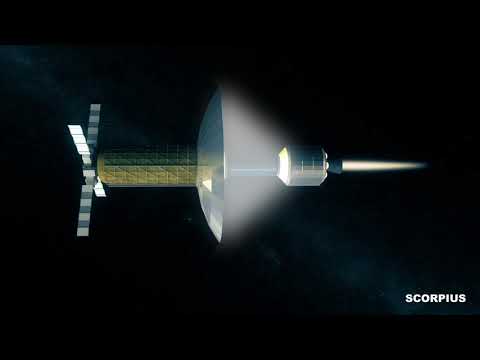