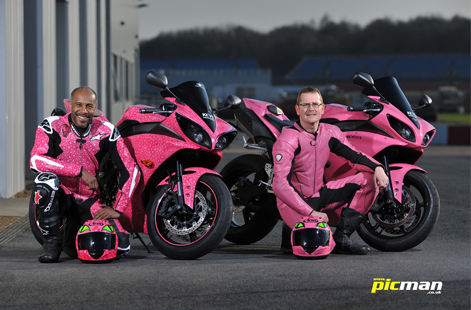 Red Dwarf’s The Cat, real name Danny John-Jules, BBC MotoGP presenter, Matt Roberts, and Steve Keys, will be riding bright pink bikes and wearing Arai helmets for 1,200 miles. The event, set to take place this October, aims to benefit the Riders for Health charity. A special website has been created for this occasion, where people can donate to the charity, either using the pledge button or buying one of the special T-shirts on offer.

The ride, which will be filmed for a TV documentary, will leave on October 30 from the Ace Cafe on London’s North Circular and follow a route taking in France’s Champagne region, Dijon, Montpellier and Barcelona.

Once the team arrives in Valencia on November 3, they will be meeting up with local supporters of Riders for Health and then lead approximately 200 bikes into the circuit for a parade lap, followed by Spain's very own Day of Champions where, it is hoped, they will be auctioning for the charity some of the exclusive items they have gathered during their trip.

"As soon as Danny (John-Jules) and Steve (Keys) told me about their plan to ride to Valencia, I wanted in! I know it is going to be a long trip and the R1 isn't exactly built for comfort, but it's all for a great cause and I know there'll be plenty of laughs along the way. I'm also a big Red Dwarf fan so for me it doesn't get much cooler than riding with the Cat!" stated Matt Roberts, who will ride the 1200 miles on the specially painted Yamaha R1 that MotoGP world champion Jorge Lorenzo used during a parade lap at the 2010 Isle of Man TT.