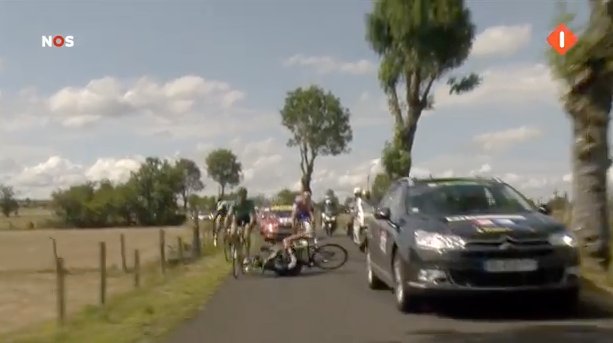 Tour de France is a spectacular display of skill and athleticism that involves more than 20 days of cycling and a total distance of about 4000 km, and which sometimes is shadowed by severe or deathly incidents that occur from time to time. Unfortunately, so it happened during stage nine of this year’s race, when a shocking incident took place, involving a French TV car and two cyclists.

The car was following the leading group of five riders 38km from the finish when it swerved across the road to avoid a protruding tree.

"They caused the crash of both riders. This behavior is intolerable," Tour de France director Christian Prudhomme told the BBC.

Full of bruises and blood, Hoogerland was just thankful to be alive and despite the horrible accident, both cyclists managed to get back in the saddle and went on to complete the stage.

Back in May, Wouter Weyland died from a crash in May's Giro d'Italia. "We can still be happy that we're alive. Nobody can be blamed for this," Hoogerland said. "It's a horrible accident and I was in it but I said to (Juan Antonio) Flecha, 'We're still alive and Wouter Weylandt died in a crash."

You can watch the video below to see the car swerving and knocking the cyclists down.