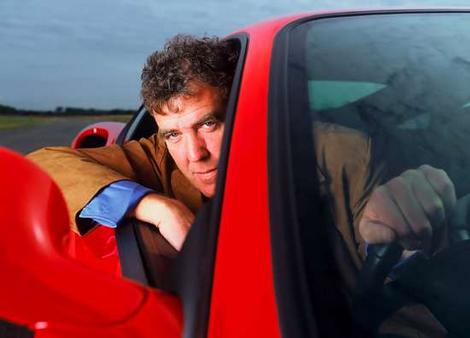 With days until the latest season of Top Gear coming to a TV set near you, some disturbing news has been unveiled today. It all started with an article published by Brit newspaper The Mirror which said that the brains behind the entire Top Gear operation, Jeremy Clarkson, was involved in a serious head-on collision during filming.

Before you start freaking out and start googling footage of the accident, relax, Jeremy is fine, at least, that's what his wife told the aforementioned publication when contacted by phone.

Details are still sketchy at this point, because the make of the car, the speed and what exactly happened, has not transpired, just that Clarkson “had a miraculous escape”.

However, more than just the TV presenter's ego was bruised in the incident, as it has been said that he did suffer minor injuries to his legs, hand and back. In fact, there is even a quote from the man himself, in his typical style. Actually, you can just hear him telling the story to the audience back in the studio: “My right index finger looked like a burst sausage, my left shin was fatter than my thigh and my back felt like someone had driven over it with a pile-driver”.

This would be Clarkson's first serious accident in 31 years he's been behind the wheel, but it's not the first major incident to happen on the show. Fans might remember that in 2006, co-presenter Richard Hammond was rushed to the emergency room after flipping at 315 mph during a shoot.

When contacted by Mirror reporters on Saturday about the whole thing, Frances, Clarkson's wife, had this to declare: “My husband is fine”. So there you have it, Top Gear fans, the big guy is alright, a little bit shaken, but nothing will keep him away from cars and from the small screen. Fingers crossed for the upcoming season which opens November 2nd in the UK!