Toyota Japan' Ad Agency Overbilled The Automaker, Has To Pay Back Bogus Charges

Mercedes-Benz is a brand generally associated with luxury and comfort, and those are two values that the manufacturer is more than happy to embrace. However, the German marque also prides itself with the safety innovations introduced by its vehicles over the course of time.
7 photos

Some of them seem like they've existed since the first motorized cart was created, but that's only because most of us weren't even born when they were first introduced. Take the passenger safety cell, for example, which Mercedes-Benz pioneered in 1954. You would imagine that after half a century of cars, somebody would have thought earlier bout creating a more sturdy structure around the most important component of a vehicle: its occupants.

24 years later, Mercedes-Benz also introduced the anti-lock braking system, commonly known as ABS. This feature prevented the wheels from locking under heavy braking, making it much harder for the driver to lose control under these situations. The ABS was developed by fellow German company Bosch, but it was a Mercedes-Benz model that first equipped it.

Volvo prides itself with the invention of the safety belt - and so it should - but Mercedes can add another great safety feature to its list: the airbag. After the ABS, Bosch was also involved in the development of the electronic stability program (ESP), a system that, put bluntly, makes sure the car is going the same way the front wheels are pointing.

Moving closer to years that sound more familiar, Mercedes-Benz introduced the DISTRONIC proximity control in 1999, making it very hard for a car fitted with this system to be involved in a rear-end crash. Assuming the Mercedes was the one coming from behind, that is. The 2000's must have been a pretty lousy period for Mercedes-Benz because the only feature it could pick from then was the ATTENTION ASSIST. The pompously named feature is unanimously accepted as being rather useless, except for coffee vendors whose sales probably increased after Mercedes cars started picturing steaming coffee cups on their dashboards.

This quest for the ultimate safety has brought the auto industry on the verge of adopting the self-driving car, which is essentially a way of encompassing all the safety-oriented features, and much more. Still, it's nice to have a look back and realize how far the vehicles we drive every day have come. Click "play" and have a quick trip down memory lane, courtesy of Mercedes-Benz. 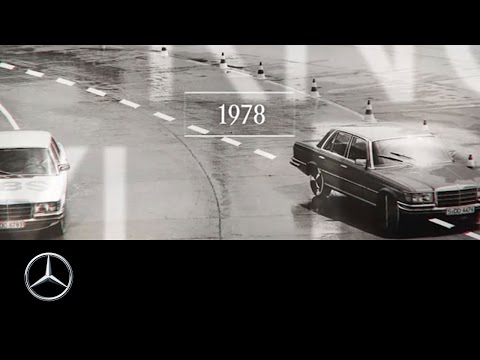