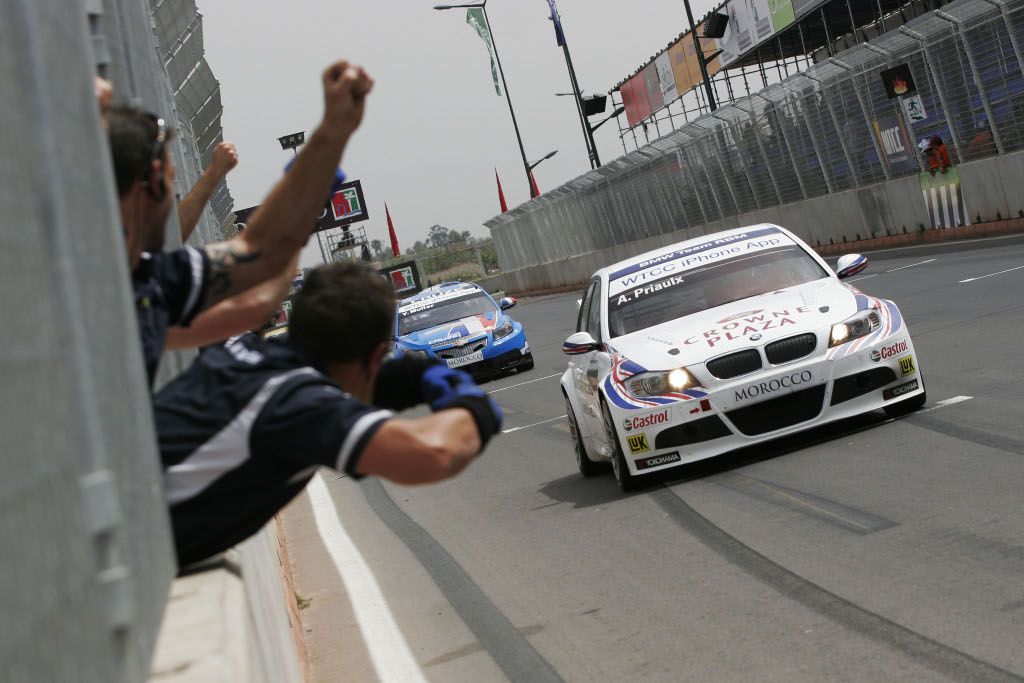 Reigning FIA WTCC champion Gabriele Tarquini and triple crowned British driver Andy Priaulx took one win apiece at last weekend's round at Marrakech, during an event-full Sunday in Morocco. Tarquini started the ball on Sunday, as he took the chequered flag only 6 laps into the scheduled 13-lap race.

The first race on Sunday had plenty of drama, as it needed an overall 3 attempts at a rolling start, while eventually ending behind the safety car. Practically, the SEAT driver only had to resist 6 laps ahead of Chevrolet's Robert Huff, after which the entire field had to driver before the SC.

It was local driver Ismail Sbai who crashed his Chevy into one of the street circuit's chicanes, only seconds after Andrey Romanov took out his BMW in the same way. As the circuit's organizers were not able to clear the track from the debris in time, the race was over after only 6 racing laps. Tarquini won ahead of Huff and 3rd place Tiago Monteiro, while followed by SEAT duo Fredy Barth and Tom Coronel.

The second race saw even more action on the Marrakech circuit, as 8th placed in Race 1 Andy Priaulx had to stay in front of the field only 2 racing laps before claiming his first win of the season. An incident in the very first corner of the race saw the first caution being flagged, which lasted until midway through the race.

After the race resumed, only one lap of racing happened before a major pile-up set off by Rob Huff's Chevrolet caused the second safety car of the day. The British driver was caught in a racing incident with SEAT's Fredy Barth, with their crash further affecting Bamboo Engineering duo Darryl O'Young and Harry Vaulkhard, and BMW's Sergio Hernandez.

Alain Menu tried to pass BMW's Augusto Farfus at the restart, but the Brazilian driver did not let go of his position and the duo made contact heading into the corner, hitting the protection wall and ending their afternoon. The last safety car of the day again entered the track, only to leave the WTCC field one more lap of racing.

Priaulx held his cool and managed to hold on to his lead, taking the chequered flag ahead of Chevy's Yvan Muller and SEAT's Tom Coronel.