Optimate USB Chargers for Your Bike Are a Must for Touring

Home > News > Technology
Vlad Mitrache
Sometimes, the simplest solutions are the best ones - it's just that finding them might not come as easy as it may seem. People do have a tendency of complicating things, but every once in a while somebody comes up with one of those great ideas that just make everybody stop and wonder how come they didn't think of it.
1 photo
The bicycle as we know it today was probably one of these inventions back when people were still struggling with those weird-looking contraptions with a large front wheel and a tiny rear one. The bicycle evolved a lot over the years, but the basic design and principle remained the same. More recently, however, a new feature was introduced: the electric assistance.

Faced with increasing distances, bike commuters welcomed the addition of an electric motor that could take away some of the rider's effort needed to push the vehicle ahead, meaning the same route could be covered with less sweat, but at the same speed. The electric bike did come with a few drawbacks, though, the two most important being its price (several thousand dollars/euros) and its weight (at least 45 pounds).

Since then, people have tried finding solutions to turning regular bicycles into e-bikes. Cases of "motorized doping" started showing up in the world of professional cycling, but for the mere commuters, no real solution was in sight.

In late April, we told you about the GeoOrbital wheel and how a simple swap of a bike's front wheel could instantly give the vehicle electric power. We thought that system was great, but that's because we had no idea about what Semcon had done at roughly the same time.

Simplifying the procedure even further, the Swedish tech company built a device that clamps to your bicycle's frame, just above the pedals hub. It consists of two pieces, one facing forward and the other to the rear. The former is nothing more than a battery pack (capacity undisclosed), while the latter hides an electric motor and a smart computer chip. It's also where the driving mechanism responsible for transferring the power to the rear wheel resides: a small, rubber wheel that is in direct contact with the tire.

It's simple, and it works. Semcon claim that this system with its 150W motor will assist riders at speeds of up to 25 km/h (about 15 mph), even though it failed to provide a figure for the maximum range. However, should it make the battery pack modular, it would all depend on its size and capacity. Right now, the whole device only weighs one kilogram (2.2 pounds), which is close to nothing.

Semcon claims that manufacturing this electric drive system only costs $100, which means that should it find a way to make it onto the market, a price of $200 seems acceptable for both seller and buyer. That would mean that getting an electric bike might cost as little as $250 - the Semcon device plus an old bike you pick at a garage sale. 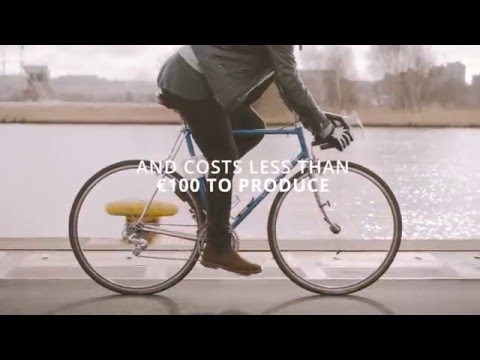