Gabriel Nica
The BMW E46 M3 is still regarded as one of the best of its kind, all these years later. Watching the video below will probably make you understand why there’s all this hype around it. When a capable driver sits behind its wheel, things get fast in a blink of an eye.
1 photo
In standard guise, the E46 M3 ran around the Nurburgring when it was new in 8:22 seconds flat which was a rather good performance back then. Then came the legendary E46 M3 CSL, which shattered the record set by the standard car with its 7:50 lap time around the famous Green Hell. That was an improvement of over 30 seconds without increasing the power too much but instead focusing on weight and balance.

Today we’re looking at yet another E46 M3 but this time, we’re dealing with a modified version. This won’t go into the books but for comparison’s sake, it’s pretty darn impressive what the driver was able to do with it, on the Nurburgring.

According to the video description, the car has been supercharged using an ESS kit but we’re not being told exactly which one they used. All we know is that ESS offers tools that can turn the S54 engine under the bonnet of the E46 M3 into a beast that develops anywhere from 475 HP to 575 HP.

Either way, we also know that the gearbox is the standard manual one while the diff has a 4.10 gear. Of course, the interior was stripped down as you can see in the video while a roll cage was added to the mix for some proper protection. Running on slick tires, the BMW managed to post a more than impressive time of 7:30 seconds, theoretically climbing to the top 30 fastest laps recorded on the Nurburgring. But wait, there’s more!

It was all done with traffic and with the new speed limits on the track, forcing the driver, Inge Hansesaetre to slow down in critical areas. According to him, he had to stay under 200 km/h (124 mph) on the way up to the Flugplatz, keep it under 250 km/h (155 mph) after it and stay at the same speed on the long straight at the end.

All those factors added 4 or 5 seconds to the final outcome which would make this M3 a 7:25 car, on par with the Lamborghini Aventador or the Ferrari Enzo, for example and faster than a Nissan GT-R. Now that’s impressive! 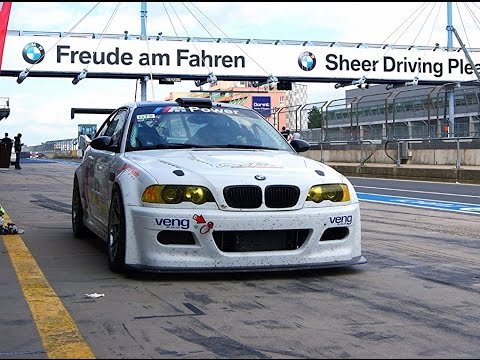