3 Volkswagen XL1 and e-Golf Are the New Starship Enterprise

4 Mr. Spock and Captain Kirk Will Promote the Volkswagen e-Golf

It took NetDragon Websoft Chairman Liu DeJian $160 million and six years to see his childhood dream come true, but things went out different for the brainiacs over at AWE me. The DIY designers have constructed the entire USS Enterprise into a glowing computer desk and office chair.
1 photo
In case you haven’t heard of them, we’ll take a second to tell you about their work. Part of the Break company, "AWE me" is a YouTube channel which streams all sorts of DIY shows. Keith Richman founded the mother company, in 1998, and it integrates several web sites that together experienced significant growth throughout the years. The company’s network of pages, many which create original video content, make it the 11th most popular video network online.

In other words, these people sure know what they’re doing, an impression you’ll most likely experience once you click that play button. Until then, however, you should understand this work of art was specially created for Jake Geiger, who is not just a big fan of the Star Trek, but also a gifted designer.

According to the man’s girlfriend, his home office is filled with all the Star Trek collectibles a person could find, a fact images later confirm themselves. As if that wasn’t enough already, you’ll find that he even has a tattoo with Spock on his leg. Seeing that he is so serious about Star Trek, it was only normal for the crew to give their best to it, and we have to say they've done a great job. 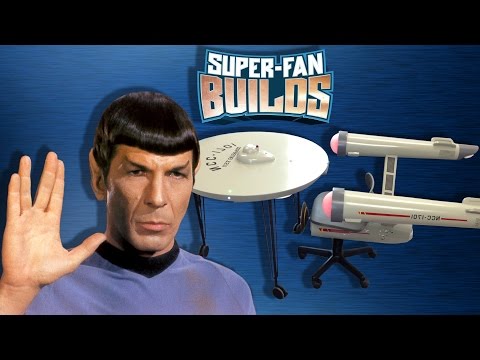