3 Horse Casually Tries to Ride a Bus in Russia, Gets Denied

4 Who Ever Thought That Painting the “Bus Stop” on the Road Could Be This Mesmerizing?

Smart Bus Stops Can Take Your Temperature, Kill the Virus We All Hate

Authorities in Seoul, South Korea have created a new bus stop concept that helps kill the virus we all hate, but at the same time, also allow people to stay safe while inside.
1 photo
The so-called Smart Shelter relies on a hi-tech feature arsenal that is supposed not only to deal with the health issue but also to make waiting for the bus more comfortable.

For example, they come with air conditioning and ultraviolet light sterilizers, with the latter specifically installed to clean the air inside. Hand sanitizers are obviously installed too, and so are laptop and mobile phone chargers along with free Wi-Fi.

Not everybody can get inside the smart bus stop, as a thermal imaging camera is installed above the entrance to measure the temperature of every passenger. If the temperature is higher than 37.5 degrees Celsius (99.5 degrees Fahrenheit), the doors do not open, as this is considered a potential symptom of an infection with the new virus.

Needless to say, there are other new-generation systems installed as well, including displays that provide information on the bus schedule. Surveillance cameras are in charge of keeping an eye on everything that’s happening inside, while solar panels mounted on the roof are supposed to power all the tech that we mentioned here.

A total of ten Smart Shelters have already been installed in Seoul, and while more authorities have already expressed their interest in adopting similar ideas, this isn’t necessarily a concept that every city can afford. Not to mention that large scale mass production isn’t possible right now given the tech is still in its early days.

The price of a smart bus stop that comes equipped with all the technology mentioned above is said to exceed $84,000, although the manufacturing costs could be reduced if more companies get involved in research and development. This first implementation of the Smart Shelter is mostly the work of LG Electronics, according to reports. 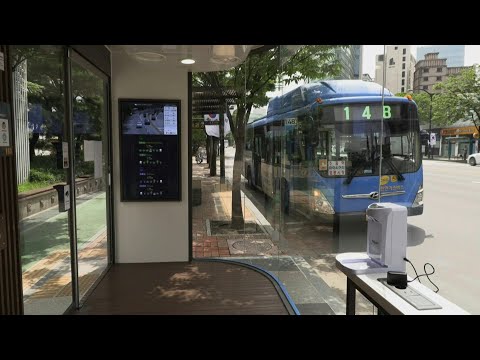