The Grand Theft Auto game series is famous for copying every supercar in the world and changing the name to something stupid. But the designers of GTA 5 didn't put everything in the game because they knew people would make their own mods… like the one that gives you the Rocket Bunny GT 86.
1 photo
For those of you who don't know, the Toyota GT 86 is essentially the same car as the Scion FR-S and Subaru BRZ. This rear-wheel drive machine with only 200 horsepower is the most famous affordable coupe in the world. Even if you've been living on Cheetos and video games your whole life, you've probably heard about it.

As for the Rocket Bunny part, this is a special body kit designed by a Japanese tuner. It consists of new bumpers, side skirts and a trademark set of fender flares. These components are needed if you want to turn a regular GT 86 into a drift car with wider tires and special suspension settings.

The GTA 5 mod also allows you to customize the car with paint, wheels, and several exhaust systems. Nifty!

The Rocket Bunny is the child of Japanese specialist Key Miura, who has some decades of playing with cars' appearances behind him. The package showed up in 2012, the same year as the car, mixing a racing approach with a rugged look brought by the riveted-on components.

Of course, to make a drift car you will also need special front suspension and a much more powerful engine since 200 hp will not unstick the hind quarters.

To build a car that looks and handles like the GT 86 in this video, you would probably need about $50,000. But you too can live your drifting dreams within only a few moments of installing a free program. No wonder kids these days don't like hard work! 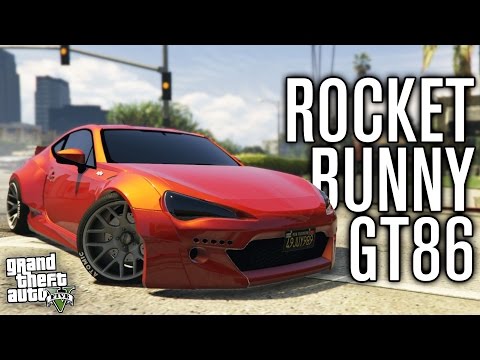