1 Paul Newman As a Car and Racing Afficionado 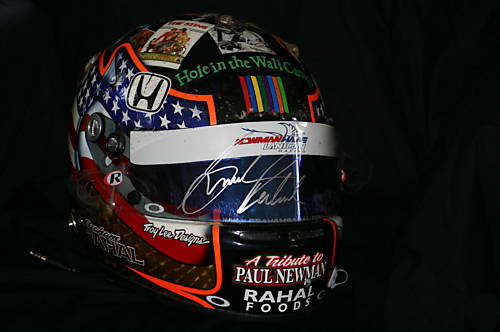 Racing takes another turn for the better as Indycar driver Graham Rahal has recently auctioned his one-of-a-kind Paul Newman tribute helmet. Styled by TroyLee designs and signed by both the late actor and Graham Rahal, the helm is not only a unique testimony to Paul Newman's acting and racing fruition but also a passageway to welfare.

Proceeds of the auction will be donated entirely to Flying Horse Farms camp, a recreational facility for children with serious illnesses. The camp is currently a provisional member of the "Hole in the Wall Camps" founded by Paul Newman and the next in a constantly growing row of establishments for ill children.

The news of the new leisure center which is to open in 2010 in Mt. Gilead, Ohio, close to Graham Rahal's home, has already sparked waves of enthusiasm among both parents and the possible little campers, especially since the new facility is more likely to become a full-time Hole in the Wall Camps member. The association was founded by Newman in 1988 and has been a driving force in children aid and charity ever since.

Taking on a Newman's rich and enthusiasm-driven existence, the helm delivers a stylishly touching message, baring the words “A Tribute to Paul Newman”. Additionally, the NewmanHaasLaningan (Rahal's team), Oakley, Honda and Hole in the Wall logos have also been included.

The helm, which is safe-kept in its original TroyLee Designs bag is also being auctioned with the pen that was used by the three to sign it. Given the latest events, this modern-day artifact stands as proof for Paul Newman's brilliantly marketed politic: hole in the wall. Unseen walls were swiftly drilled in order to allow the passing of such messages. Hopefully, FlyingHorse will take it both farther and further.