The Mercedes-Benz Citan Kombi scored a Euro NCAP safety rating of just three stars, the poorest result for the German company since 1997.
1 photo
Although the result might seem surprising to say the least given Mercedes’ strong reputation as far as safety is concerned, we must stress that the people carrier is actually a restyled 2008 Renault Kangoo.

Besides failing its manual speed assistance test, the Mercedes-Benz Citan also had trouble with deploying its side curtain airbag, leading to a weak result in the side pole test. Moreover, Euro NCAP penalized the car further for the noticeable gap discovered between the B-pillar and the frond edge of the sliding door, which “might jeopardise the protection of occupants’ limbs. In addition, the front seats and head restraints provided marginal protection against whiplash injury in the event of a rear-end collision.

“We’re disappointed that a company with such a strong tradition of safety as Daimler would take an old model and basically do nothing to make sure that its safety is up to date. With a little bit more invention, they could have improved the restraint systems. They just haven’t spent the money. We know that Mercedes-Benz can do much better,” said Euro NCAP’s secretary general, Michiel van Ratingen. 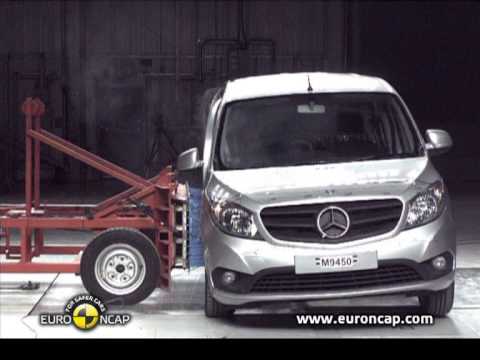