Here's one thing you may or may not know: in 1998, the Mercedes-Benz CLK GTR - a limited edition model restricted to just 25 units built by AMG only so the racing car would receive its homologation - was declared the most expensive production car in the world by the Guiness Book of World Records.
1 photo
Unless that piece of tarmac was also the most expensive asphalt strip ever produced, what you are about to see in the video below was not a fair trade. The driver of this $1,547,620 (almost 1.4 million euros) Mercedes-Benz CLK GTR attempts to exit a parking lot knowing all too well the draining ditch he is about to cross might pose a problem.

Now, we all know that in situations like these, tackling the obstacle at a 90 degrees angle is the worst possible way to go about. Our driver ignores that and begins his short but painful descent into the draining moat.

At this point, please make sure you have your headphones on and your volume is turned up. This is the sound you hear when too much money meets stupidity. This is the soundtrack of a 1.5 million dollars car's bumper scraping the asphalt. It's also something you never want to hear again... and yet you keep hitting that replay button.

Even though he clearly realizes what he's done, the man behind the wheel is also aware of the fact he's got an audience armed with recording devices, so his pride gets the best of him and he drives off. Probably looking for a more accessible parking lot where he can lick his very expensive wounds in peace.

Watching this clip for quite a few times, I was eventually struck by a very obvious question: how did he get that car in the parking lot in the first place? And, more importantly, what would I have done if I were in his shoes, besides angling the car? And how would you have handled the situation? 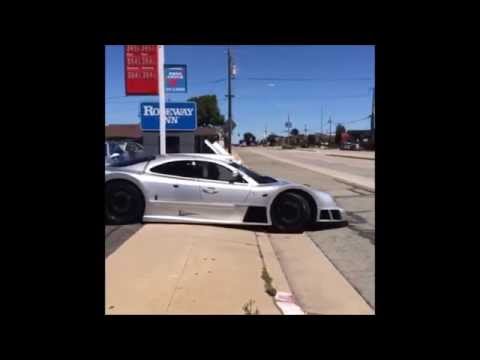