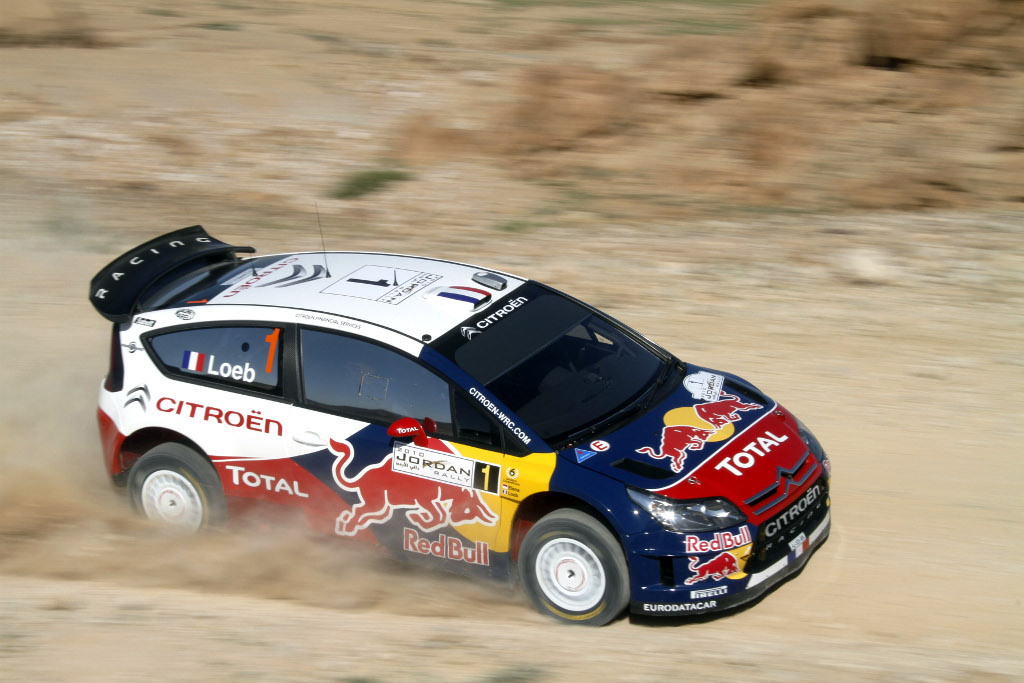 Sebastien Loeb cruised to a comfortable win in Rally Jordan on Saturday and further increased his gap to 31 points from main title rival, Ford’s Mikko Hirvonen, in the overall classification. Starting the last day of running in Jordan as a road opener, the Frenchman did everything right throughout the 6 stages on schedule and took a few wins in the morning to eventually secure a 35.8-second cushion from Ford’s Jari-Matti Latvala.

Despite emerging as rally leader after the Friday running – more than 27 seconds ahead of Latvala – the reigning world champion did not start first on the road on Saturday. Citroen pulled off a strategic move and sacrificed their Junior Team driver Sebastien Ogier – second overall at the end of Day 2 – early on Saturday, asking the Frenchman to check in earlier than scheduled.

That brought him an 8-minute penalty in the rally classification but, more importantly for Citroen, the road opening role on Saturday. Having Ogier to clean up his road throughout the day, Loeb had no problem getting his C4 to some stage wins, while keeping Latvala further behind.

Loeb’s championship rival Mikko Hirvonen started on SuperRally rules on Saturday – having broken his suspension and crashing out of the event on Friday – and was asked by Ford to play the lieutenant role for Latvala for the remainder of the rally. Like Ogier, he was instructed to check in earlier than scheduled, in order to give Latvala an even cleaner road for the 6 special stages remaining.

That eventually proved useless, as Loeb made no mistakes towards his first ever win in Jordan. The podium was completed by Citroen’s Petter Solberg, while works driver Dani Sordo had to settle for 4th overall.

Although demoted all the way to 8th place following his 8-minute penalty from the rally organizers, Ogier managed to save the day with a 6th place in the overall classification, passing Munchi’s Federico Villagra and Citroen Junior teammate Kimi Raikkonen on Saturday, but settling behind Stobart’s Matthew Wilson.

The overall top 10 was completed by Henning Solberg and Xavier Pons.

After 3 rounds in this year’s WRC, Loeb leads from Ford’s duo Latvala and Hirvonen by 25 and 31 points respectively.