3 Margaret Thatchers’ Private Armored Bus Is Up for Sale

First unveiled last year at the Eurosatory defense and security show in Paris, the CombatGuard is most likely going to be one of the replacements of the famous Humvee, an armored vehicle that has been with worldwide armed forces for decades. While the old-school war machines are being sold cheaply online today, the 54-inch tires massive 4x4 is getting more and more popular.
1 photo
Designed by Israel Military Industries, the CombatGuard is not only an imposing war vehicle with a three feet of ground clearance, it also comes with plenty of war technologies. Even though it will keep the eight passengers inside safe against high level of ballistics through its super strong monocoque capsule, the truck remains quite powerful and fast. The 17,637-pound (8-tonne) vehicle is able to reach speeds of up to 93 mph (150 km/h) on road and an impressive 75 mph (120 km/h) off-road.

This high performance is partially thanks to a GM-sourced Cobra 6.6-liter turbo diesel that produces 300 horsepower. Being powerful and fast are not its only features, but also the fact that the truck is capable of 90 degree approach and departure angles. The off-road beast is able to climb 70 degree slopes and can wade through five feet (1.5 m) of water. Moreover, this puppy can also clear a 2.5 foot (762 cm) vertical obstacle, which was a key requirement for fighting in urban areas.

As to the matters of design and weaponry enhancements, the Combat Guard is a modular concept that comes with changeable cabin configurations available for different missions.

Whether we’re talking about high level armor or additional weapons, the Israeli company is offering all sorts of options. The weapons and active protection system turrets is integrated with the current model and it includes a medium or light machine gun, along with optics for aiming and surveillance tied to a flat panel display and joystick.

So good to know new killing machines are being designed by the hour. Makes you feel safe. Or not... 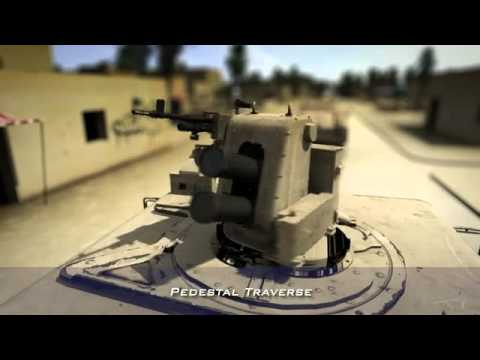