Highway Plays "America the Beautiful" If Traveling at the Right Speed

Vlad Mitrache
Everybody thinks they know how to raise a child, but the truth is they have absolutely no idea. We are all clueless and, unless we do a bit of studying, we're just going to give it our best shot, which might not account for too much.
1 photo
So even though we want our kids to grow up to be happy, independent, and generally speaking, beautiful human beings, we will unknowingly do everything we can for the exact opposite to be true. We'll yell "yeeeeyyyyy" excitedly whenever they do something good, and scold them when they don't behave as we'd want them to because that's what feels natural to us.

Dig a little deeper and you'll find the notion of "unconditional parenting," a relatively new philosophy - well, it's about 50 years old, but compared to the thousands of years that the other techniques have been honed over, it's still barely learning to walk. The main idea is that you shouldn't try to control your child in any way, but give him or her the available information so they can make the right choice for themselves. Things are a lot more complex and complicated, and we won't go into detail, but it's worth checking it out.

In our relation to the authorities, they're the parents, and we're the kids that need to be disciplined. Unfortunately, the Government hasn't heard about "unconditional parenting," so it's still relying heavily on dishing out punishments. Instead of sending us to our rooms, it usually sends out fines in the mail, which is a lot worse. However, every once in a blue moon, it decides some positive reinforcement is in order.

There's this strip of the Route 66 in New Mexico that plays "America the Beautiful" when cruised over at the right speed - which, you guessed it, coincides with the speed limit. The New Mexico Department of Transport commissioned a private company to turn a pretty drab one-mile stretch of the famous Route 66 into a musical instrument. It wasn't a very difficult task - it only involves careful placement of metal strips (like the ones used to keep us from straying off our lanes) at certain distances and running with the tires over them at the right speed.

So, don't go over the speed limit, and you get a treat. Who's a good boy, huh? 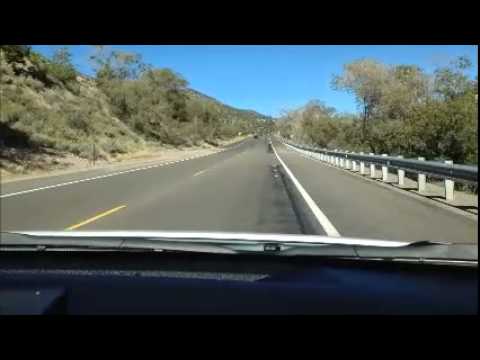