2 Faraday Future's Lighting System Is like Nothing You've Seen Before

3 The State of Nevada Played Roulette with the Taxpayers' Money

Porsche Wins Another Court Battle Regarding Its Failed Takeover of Volkswagen

Vlad Mitrache
Faraday Future continues to raise expectations for its electric crossover set for a January 3 reveal by showing us a drag race against a Tesla Model S P100D with Ludicrous mode active.
7 photos

The U.S.-based and Chinese-backed company kicked off the week before by showing us a teaser video of its upcoming car. The images showed a camouflaged prototype line up on a drag strip alongside some of the world's fastest cars, with its closest rival not missing the get-together.

We're talking about the Tesla Model X P100D, the world's first and only electric SUV, a label that instantly paints it as Faraday Future's closest competitor. They also had a Bentley Bentayga there, but we sincerely hope it was present strictly for its dynamic performance similarities, and price related ones (the British SUV is a machine worth a quarter-million dollars).

A Ferrari 488 GTB completed the motley crew of quick on their feet contenders that had been gathered together to show they're not quick enough. As expected, a few days later, Faraday Future released a video showing all those cars get beaten by their mysterious vehicle.

However, in one of the shots, we also spotted a dark gray Tesla Model S present at the track. The video did not make any reference to the electric sedan, so we assumed it was the only car that managed to defeat the FF crossover, which was why the footage was missing.

Well, it turns out we were wrong, and Faraday Future was merely saving the best for last. A recently released video gives us the hotly anticipated race in all its glory - well, we get to see the start and the end, which is enough.

Since it made the cut, you figured by now that the Model S - officially the world's quickest car to the 60 mph mark with a time of 2.4 seconds - only came last. But the video states the Model S reaches 60 mph in 2.5 seconds, which was the speed prior to the November update.

Either Faraday Future isn't aware of the modification, or it benchmarked its vehicle against a non-updated vehicle. But even if it hasn't, given the gap at the end, the result is still largely irrelevant. A minute difference in the reaction time of the two drivers could have tilted the scales one way or the other, since there's definitely less than 0.1 seconds between the two.

If Faraday Future's intention was to convince us its vehicle is quicker than a Model S P100D, then it failed. But if it wanted to convey the idea that the crossover is crazy-quick, then, yes, message received. Now go ahead and find the money necessary to build it. 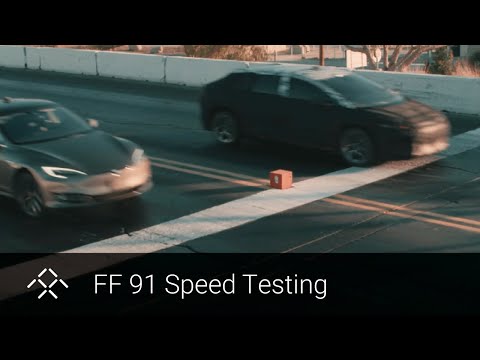