3 Citroen DS4 Teaser Rolled Out
Up Next 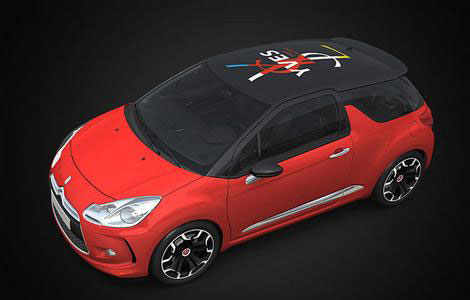 Citroen is keeping the DS3’s marketing engine running – the company’s last exercise is a Yves Saint Laurent special edition of the DS3, created in collaboration with the world famous fashion designer.

The car has been dressed in Yves Saint-Laurent colors, combining red (used for the DS3’s body) with Black (featured on the roof of the vehicle). It also comes with and Yves Saint Laurent Logo on its roof and rides on bespoke rims.

The trendy version of the DS3 is not for sale – it was built to bring VIP guests to the premiere of the fashion house’s retrospective exhibition, held last week. The display was created by the Pierre Berge foundation and features over 300 models that showcase a complete image of Yves Saint Laurent’s work.

The DS3 is a special vehicle for Citroen, as it marks the introduction of the DS range to the market. The new line-up will be formed by luxury incarnations of some of the carmaker’s existing models. The DS3, based on the C3, has already been launched and it will be followed by the DS4 and DS5.

Citroen has also developed a hot version of the hatch, called DS3 R, scheduled to enter the market in the second half of the current year. This will be powered by a turbocharged 1.6 liter unit(also used on BMW’s MINI) that develops 200 HP and 275 Nm of torque. As it is the top of a premium range, the DS3 R comes with exquisite interior and exterior features and will only be built in a  limited series of 1,000 units.