Home > News > Car Profile
Alex Oagana
The start of 2014 seems to be the filled with comparisons between the bonkers S-Model versions of the E 63 AMG or the CLS 63 AMG and all of their competitors.
1 photo
Always-enjoyable car journalist Chris Harris decided to pit the Mercedes-Benz E 63 AMG S-Model against the BMW M6 Gran Coupe and the Jaguar XFR-S in the latest sports car comparison on the Drive YouTube channel.

As expected, the comparo isn't exactly perfect, as even Chris suggest in the beginning of the video for a number of reasons.

First is the fact that this is the UK, so the weather was far from perfect or at least consistent throughout the video.

Secondly, the BMW M6 Gran Coupe is a better competitor for the CLS 63 AMG instead of the E 63, while the Jaguar XFR-S would have probably been better off being replaced with the Audi RS7. Not to mention the fact that the E 63 AMG S-Model with 4Matic (not available in the UK, ed) would have probably left the other two in the dust in the drag race at the end.

Then again, this isn't exactly a numbers comparison made in Germany, so all things are forgotten after Harris starts throwing each of the super sedans sideways for quite a hefty amount of minutes. Enjoy! 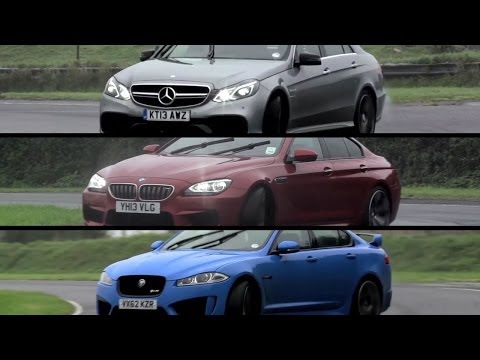