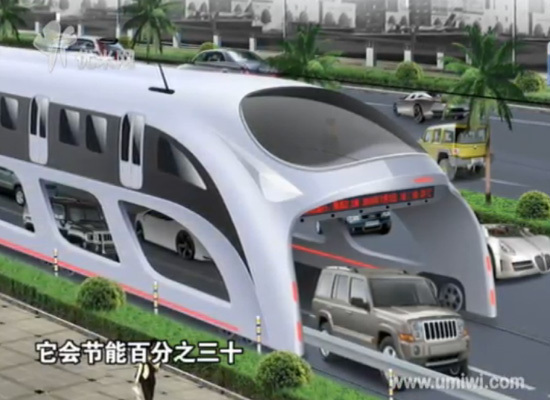 Being the fastest growing automotive market in the world and at the same time one of the world's biggest polluters, China is facing a congestion problem of a huge scale. Although not there yet, the Chinese are trying to find solutions to this problem and some of them, we must admit, are so crazy and simple we wonder how come we didn't think of it first.

The Chinese plan to blend two of the most widely used means of transportation into one, effective use of the infrastructure. Instead of creating additional railways on which trains to travel, China is planning to use the existing roads as railways, with minor touches here and there, of course.

Shenzhen Huashi Future, a company which is usually associated with parking equipment in China, has made a proposal which can do nothing but amaze: the three-dimensional fast bus (this is how everybody calls it, although train might be a more appropriate name for it, given the fact that it will travel supported by some type of rail)  which can ride over cars and roads.

The three-dimensional fast bus will be deploying its wheels on each side of the road, on the rails fitted there. The actual wagons will be situated way up, over 2 meters higher than the surface of the road. Through its belly, the cars can keep on driving without being in anyway stopped from doing so by the train riding above.

And if you think this is just a figment of Shenzhen Huashi Future's imagination, you're mistaken. According to The Huffington Post, the first portion of the wacky track, measuring 115 miles (185 km), will begin construction in the Beijing's Mentougou district later this year.

According to the company, the entire railway will take one year to build and will cost 500 million yuan ($73 million). As for the train itself, it will be capable of transporting from 1,200 to 1,400 passengers. It uses only electricity or solar power and can travel by speeds of up to 60 km/h (37 mph). The system is hoped to help cut congestion by about 20 to 30 percent.