1 Planning a Road Trip to South America? You Could Rent La Chanchita

Remember that backyard you and your friends were hanging out when you were just kids. There used to be that old and tall tree where your biggest engineering dreams would come true. Well, there are some grown-ups out there that still believe a tree house is the coolest thing ever.
1 photo
Sure, the first homes built in trees were probably those meant to protect biologists from wild animals as they would conduct their research in the middle of the jungle, but most of us will think of childhood whenever we see one. Heck, along with subterranean and ground level houses, tree houses nowadays have even become an option for building eco-friendly houses.

To be honest, ever since the mid-1990s, when these recreational buildings have enjoyed a rise in popularity around US and Europe, several businesses specializing in the construction of tree houses have embarked. Whether we’re talking about children’s play structures or fully functioning homes, these companies will build tree houses of various degrees of permanence and sophistication.

Nevertheless, we’re not here to talk about actual tree houses, but rather about RVs. Well, in fact it’s none of them, but rather both. You see there’s this French brainiac, Bufalino Benedetto, who’s been building all sorts of weird structures on wheels. One of his starting projects was as simple, as practical, and could one day prove to be a great idea you could use yourself.

Dubbed “La caravane dans le ciel”, which stands for The Caravan of the Sky, we’re basically looking at an old trailer sitting on a scissor-lift. It’s that easy. Sure, if we were to build such a house-of-the-sky, we’d probably work on the trailer’s interior and exterior design a bit, but that’s just us.

Point is the idea could save a tree house fan a lot of time and even some cash one day so we thought sharing would be nice. 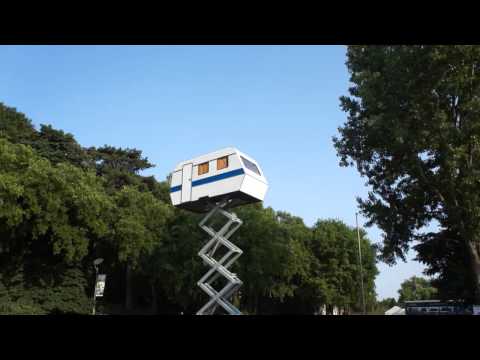