4 Local Motors Flips Over, Crashes but Continues to Race

5 Like a Russian Boss: Almost Crashes, Overtakes in Reverse
Car video reviews:
Up Next

While saying this may not be politically correct, we all know Russians have a very difficult time driving on public streets without getting involved in some sort of crash or road rage.
1 photo
We already gave you a sample of that today, but wait 'till you see what's next. Forget about cars for a moment, because we're talking about bigger and heavier… vehicles. A total weight of about 50 tons (100,000 pounds!) if you want some figures.

This huge crash you're about to see didn't happen on a public road, but at a construction site (in Russia, of course), after a 35-ton crane failed to lower a 16-ton bulldozer into a pit.

Apparently the crane wasn't big enough to move the bulldozer, but we do suspect human error played a part in this, and the six-wheeled vehicle simply tipped over and fell for about 40 feet.

Luckily, no one was hurt in the crash, as the crane operator managed to jump out just in time, but someone will have to explain over $100,000 worth of damage. 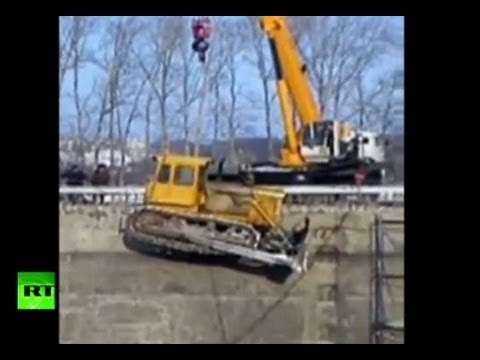