In an earlier video, the guys from Auto Express pitted the BMW M235i against Mercedes-Benz’s A45 AMG, only to find that the Bimmer was the better car overall, even though it was cheaper. During the same comparison they claimed that the Bavarian could take on a far more pretentious car, the Porsche Cayman.
1 photo
It seems like the guys from Evo were listening and they decided to get the two together on Blyton Park and see exactly if the AE take was accurate. Therefore, the two were raced and the results were rather interesting.

Just like the M235i, the new Porsche Cayman was welcomed with a big round of applause when it was released. Praises and bells were rang and most of the auto media claimed it was a performance bargain, especially considering it’s wearing the Stuttgart badge on the bonnet.

The small coupe from BMW was equally impressive in reviews. Of course, it depends on who you ask. If it’s someone that actually understands what the Germans tried to do here, you’ll see a praising review. If it’s someone that doesn’t actually know the difference between an M car and an M Performance Automobile, you’ll notice a disappointing take on it.

Even so, the two are not direct competitors. If it’s not because of the pricing strategy, it should be because of the seat configuration. Whereas the 2 Series has 4 seats that are actually usable, the Cayman has only two. That means the BMW will be, inevitably, heavier but it’s also more powerful.

The Porsche uses a 2.7-liter naturally aspirated engine making 275 HP and 213 lb-ft (289 Nm) of torque while the BMW has a 3-liter inline 6-cylinder turbocharged unit making 326 HP and 450 Nm (332 lb-ft) of torque. Both cars were fitted with manual gearboxes for this comparison.

The Cayman was a little lighter than the BMW and that showed on track. The gearbox was apparently more precise and the steering didn’t disappoint either. The only problem is that the Porsche is a bit more expensive (nearly $10,000 more), slower in a straight line (5.4 seconds vs 5 seconds) and less practical. But, if you’re all about tracking the two, the Cayman is the car to go for. Take the M235i if you’re other stuff as well with your car. 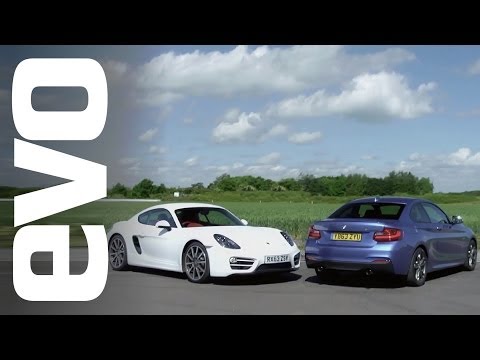