Ever since BMW launched the i8 and announced its specs, the world rushed to compare it to other sporty coupes that had roughly the same performance or horsepower numbers. That meant the the hybrid plug-in Bimmer was pitted metaphorically against the Porsche 911 and the Audi R8.
1 photo
While the comparison to the latter was done strictly because of the performance the two cars show (as the horsepower comparison would be futile) the former was done because the entry-level Porsche has roughly the same amount of power.

Furthermore, the 911 was long regarded (and still is) as a benchmark in both performance and driver engagement, not to mention the agility it has. Basically, it’s a hell of car with a price to match.

The 911 Carrera would be the perfect rival for the i8 in this regard. Fitted with a 3.4-liter naturally aspirated engine making 350 HP, it would be barely short of the 362 combined HP of the i8 coming from the 1.5-liter 3-cylinder engine at the back and the electric motor up front.

What we have here, though, is not a fair duel. The guys from EVO pitted a Carrera S with a Power Package against the BMW. That means, unlike the normal Carrera, this one has 430 HP and 440 Nm (325 lb-ft) of torque and is hooked up to a PDK gearbox. In this configuration, the Porsche is faster than the i8 to 100 km/h (62 mph) by 0.4 seconds.

It’s rather needless to point out who win by now, right? The truth of the matter is, the i8 still did pretty well considering the 70 HP disadvantage, despite having more torque. What’s more, the BMW was expected to have a slight advantage over the first few meters due to its all-wheel drive setup but Porsche’s perfect launch made it rain on the Bimmer’s parade. 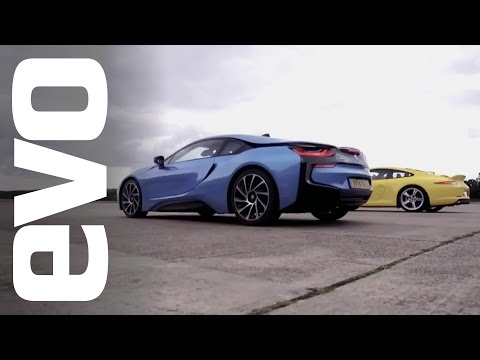