1 Watch This Engineering Tank Freeing the Way for the Military

4 Russian Tank Drifts, Flips Over and Crashes on Its Side During Training

Home > News > U-turn
Vlad Mitrache
Here is one diesel vehicle nobody will be testing for emissions: the Armata T-14 main battle tank, a fifth generation of Russia's primary armoured fighting vehicle.
1 photo
There are a lot of noteworthy things about the Armata T-14, but we'll start with the name. First of all, "Armata" isn't really part of the new tank's name, but only a reference to the platform it's built upon. Called the "Armata Universal Combat Platform", it will spawn other armoured vehicles in the future like self-propelled guns or anti-aircraft defence units.

As usual with the Russian tanks, the numerical value links the tank to the year it was finalized, so in this case it's 2014. The T-14 is also the first Russian tank to be completely developed in the post-soviet era, and it only took six years even though some aspects had to be redone from scratch (like the turret or armor).

The Armata T-14 has only recently been shown in public, first with the gun and turret hidden, and then without any covers. The most important thing about this tank (at least from the non-classified information) is the fact all of its crew members are seated in the hull.

That means the Armata T-14 has a completely automated and unmanned turret, which is a world first in the history of main battle tanks. This allows the designers to offer better protection for the crew, but it might also hinder their situational awareness, as there's little direct contact with the environment.
First fully-unmanned tank?
On the other hand, it opens other possibilities such as turning the Armata T-14 into an unmanned ground drone with minimum interventions. Since outside vision already relies on HD cameras and sensors, while the firing and reloading processes are done automatically, the only thing that would have to be taken off the hands of a crew member is the actual driving of the tank.

It also has defense capabilities which the Russians say can intercept incoming missiles fired by Apache gunships, while the Americans claim they will only be effective against RPG and sub-caliber projectiles.

With a 1,500 hp diesel engine and a relative low weight for a main battle tank, the Armata T-14 is quoted to have a 90 km/h (about 56 mph) top speed, which is well ahead of the US M1A2 Abrams'. It's also cheaper to manufacture with an estimated price between eight and nine million dollars.

The Russian army is currently running about 20 prototypes of the Armata T-14, but full production is expected to debut shortly. The Russians will be getting about 500 units a year while other countries in the eastern block should see their share of new tanks arrive pretty soon. The biggest buyer of Russian military equipment is India, but other countries such as China could also show interest.

Since this is military equipment we're talking about, we clearly know only what we're supposed to. You can be sure there's a lot more to be found out about the Armata T-14, a lot of which can only be seen on a battlefield. So here's to hoping those things will forever remain a secret. 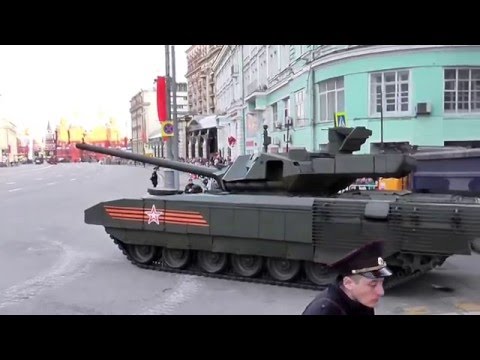