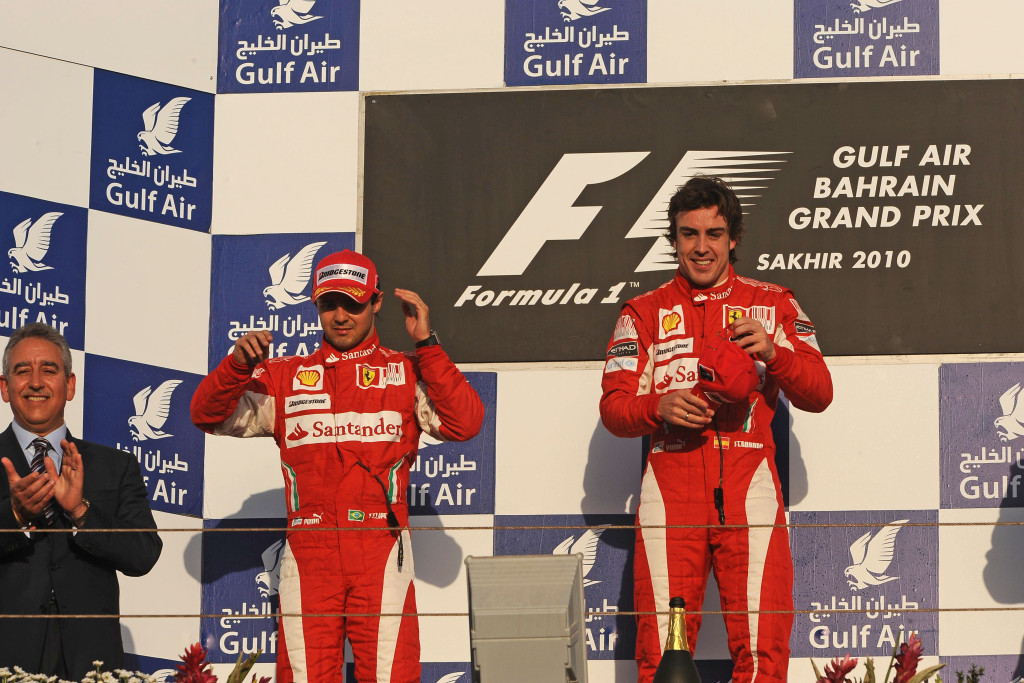 Ferrari started off their 2010 campaign in Formula One great, taking an incredible 1-2 win in the season opening Bahrain Grand Prix on Sunday. Fernando Alonso won at his very debut with Ferrari, powering to victory ahead of his new teammate Felipe Massa. 2008 world champion Lewis Hamilton finished the race in 3rd place.

Nevertheless, it was Red Bull’s Sebastian Vettel who controlled the race for the entire first half, before an engine problem forced him to drop position after position until finally crossing the finish line in 4th place.

Alonso powered past his teammate Massa after the first couple of corners, running the majority of the race in 2nd place. The Ferrari duo then followed Vettel until Lap 32, when both took advantage of the German driver’s problems and surged into the top 2 positions. A few laps later, Hamilton would to the same to earn his 3rd place.

Apart from Vettel, there was really no one that could keep the pace with the two Scuderia drivers, as both Alonso and Massa seemed to race in a league of their own for the majority of the afternoon.

Nico Rosberg had a good start on Sunday and emerged in 4th place after the first couple of corners, but was eventually overtaken by Lewis Hamilton after the first pit stop and had to settle for 5th place overall, ahead of teammate Michael Schumacher.

The 7-time world champion lacked pace throughout the Bahrain race and really did his best finishing 6th overall, while managing to keep his position in the late stages of the race ahead of McLaren’s Jenson Button and Red Bull’s Mark Webber. The Top 10 was completed by Vitantonio Liuzzi and Rubens Barrichello.

The first DNF of the day belonged to HRT F1’s Karun Chandhok, while soon followed by the two Virgin Racing drivers Lucas di Grassi and Timo Glock, his teammate Bruno Senna and the two Sauber Ferrari drivers Kamui Kobayashi and Pedro de la Rosa. In addition, Renault’s Vitaly Petrov, who managed to climb all the way into 11th place (after starting 16th), had to call it a day in the garage due to a problem with his car’s front right-hand suspension. Additionally, Toro Rosso's Sebastien Buemi went off the track with only one lap to go.

Fernando Alonso: "A very special day for me. Coming back the top of the podium is always special but even more special with Ferrari. We have history behind the team and all the expectations a driver has when he drives for Ferrari. There is no better way to start the relationship. This is the best team in the world. This first victory is dedicated to all the people in Italy, the mechanics here and president di Montezemolo. This result is very, very positive."

Felipe Massa: "Being here with a competitive car and going through the whole race with good pace, so thanks to God I am fine and thanks to everybody who was supporting me in a difficult time. The race was really good and fantastic for us. For sure I didn't have a good start, I lost an important position to Fernando at the first corner. After that the race was perfect for me on the soft and with the hard."

Lewis Hamilton: "I had quite a good race, unfortunately I lost a bit of ground, locked up into Turn 4 and went wide, got in a bad position and Rosberg got past me. I was then much faster but it's difficult to follow here and look after the tires. If I was ahead of him maybe I would have been able to follow the train these guys (the Ferraris) were creating. It is a strong result for me and the team. It was more than we expected. We need to continue to push to keep up with these guys."