Let's talk about the elephant in the room, also known as the asterisk in the title. Yes, the Audi RS3 Sedan can develop up to 850 hp according to its owner, but given the conditions, the same owner decided on limiting boost in an attempt to keep traction under control.
9 photos

Just in case the gray sky and the puddles on the road haven't given it away already, this is another confrontation put together by Officially Gassed's Jamie in the wonderful British winter weather. But, hey, it could have been worse: it could have snowed, which obviously would have meant no race at all.

Both of these cars have all-wheel drive, and if you were a drag racing enthusiast in the UK, you'd be crazy to even consider a car that doesn't have it. Ironically, one of the rear-wheel-drive supercars currently dominating drag racing comes from England but you know what they say: even a broken clock shows the right time twice a day - or, more appropriately in this case, even the British have two sunny days a year to test their RWD beasts.

Back to the two cars involved in today's battle, even before glancing over the specs, you would immediately incline to hand the 911 Turbo S the favorite status. Except if the Porsche were stock, it would stand no chance against the tuned RS3 Sedan, even with its tempered boost.

However, it's as far away from stock as that weather is from California's. The 911 puts out a claimed 900 hp, yet the most impressive thing is the way that (also tuned) PDK transmission shifts gears quicker than Eminem spits out words. Before the car covered 30 yards, the 911 is already in third doing god knows what speed.

Both the 911 and the Audi use Toyo R888R tires, which means that had this race taken place on dry asphalt - or, better yet, a prepped surface - we would have had some truly spectacular results. Not that the water is able to keep that from happening, but still, these machines deserve the perfect conditions to show everything they're capable of. 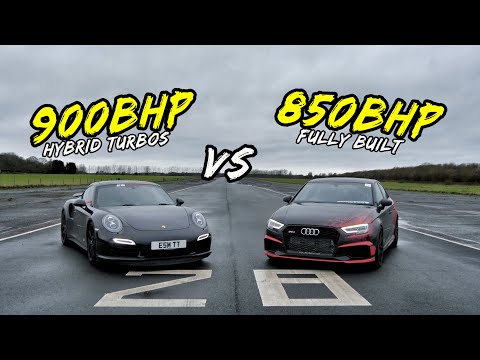