People are always saying that the Miata and the Toyota GT86 are the ‘affordable’ cars that will get you the most bang for the buck but if we’re serious about this, that’s not even remotely true.
1 photo
Statistics show that paying even the starting price on either of these cars makes you one of the wealthiest people on the planet. As a matter of fact, if you have more than $10 in your pockets right now, you’re one of the 70% luckiest people in the world.

Therefore, these are only affordable in developed countries and since those account for only a small margin of the grand total, we can’t really call them cheap, now can we?

Moving on, the guys from Autocar put together a competition between these two and two more expensive alternatives that should be within reach in terms of performance. Were they right? We don’t think so but hey, for comparison’s sake, we’ll play along.

The four cars chosen for this test were the Mazda Miata MX-5, the Toyota GT86, the Renault Clio RS 220 Trophy and the MINI John Cooper Works hardtop. As you can clearly see, there are some rather big discrepancies at play here.

From the fact that the power difference goes up to nearly 70 horses in some cases to the pricing issue, this is one hell of a diverse group. Either way, the plan was to see which one is fastest around a track and which one is most fun.

Considering the layout of their circuit, we’d say that the MINI should walk it, judging by its power advantage. The Brit has 231 HP and 320 Nm (236 lb-ft) of torque at its disposal and probably the fastest gearbox here. However, all of its rivals are lighter on their feet, in the case of the Miata by nearly 300 kg (660 lbs). Will it be enough to make up for the things lacking under the bonnet? Let’s see. 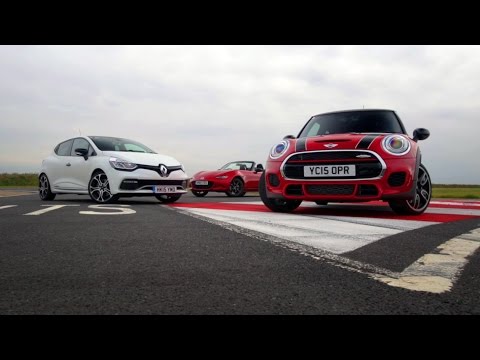