Jaguar Land Rover is reinventing itself under Tata Motor's umbrella and the Brits seem to be doing a great job. However, the two carmakers have to be split if we leave the image & prestige aspects aside, with Jaguar building a clear lead in terms of change.

Jaguar and Land Rover are now determined to offers cars that would receive the same score in the event of an evaluation with or without their badges and fine leather and, like we said, Jag is moving faster than its sister company.

However, Land Rover is determined to change this and the Evoque is the company's first full-throttle effort for this. Basically, we are talking about the first new-age Land Rover.

The first sign of the Evoque hurricane (we don't care about the actual origin of the car's designation - to us, the compact SUV's name is borrowed from nature's force) appeared in 2008, when the carmaker celebrated its 60th anniversary by reinventing itself through the release of the LRX concept.

The time for the production car to be unveiled has arrived and what we saw was... the LRX concept. Yes, the Evoque is almost identical to the design study that prefigured it, itself a very impressive creation.

But is it more than that? What's hidden behind the pretty face... besides a pretty profile and a pretty rear end?

The answer to this questions comes in the following chapters, where you'll be served with creme de la creme de Evoque, which, in English, means a salad of the 240 hp 2.0-liter turbocharged petrol engine and a lot of extra topping with optional flavor.

There are many automotive dreams that can turn into nightmares when translated into real life, such as the famous race car on the road - the majority of those who wish for this are not prepared for the harsh experience delivered by a motorsport machine and would actually never choose it.

The Evoque manages to pack a dream that's just as widespread as the aforementioned one: driving a concept car. Using the Evoque to get from A to B will give people the impression that you've just blasted through the windows of an auto show display with a stolen design study.

The vehicle is nearly identical to the LRX concept that prefigured it, but, speaking from a visual point of view, it is so much more than this.

The three-door version we drove is probably the first coupe that claims to be one, isn't, and actually makes an excellent one.

And it's also a perfect example of what the word crossover should mean: this is a pure cross-bread between a coupe and an SUV. Walk all around the car, or jump above it, and you won't find one single line that was drawn just to bring others together.

The Evoque is a design masterpiece, but this aura is exactly what puts a heavy burden on the car's shoulders  fenders, as the rest of it has to raise to the standard imposed by the exterior design cues. Oh, and it looks bewildering when it's covered in mud, with its LED eyes fighting to get through.


We think we know how the interior of our test car was created. Somebody took an Evoque cabin, threw in a white leather finish for a vast part of its (the seats, the door panels, the dashboard and the steering wheel). That person was so satisfied with its work, that a bottle of Burgundy wine had to be opened as a celebration. An unexpected, little explosion followed, but the result, instead of being a disaster, was something as refined as the liquid the was splashed all around the interior.

Both the leather and the colors are optional extras and, together with the multitude of features that, by the way, have ergonomically-placed controls, create a premium feeling.

However, this can't be said for the "middle" area (vertically speaking) of the cabin, which is where Land Rover decided to cut costs. Beside the nice metallic trimming in our test car, sat a land of much cheaper-looking black plastic.

And it's not just the plastic: the Terrain Response controls, for example, are no longer concentrated in a know like in the car's big brothers, but com in a form that seems borrowed from an average B-segment car. Fortunately, the average part of the cabin is overwhelmed by the plush one.

The design of the interior is also new for Land Rover, being a pretty far stretch from what the company has accustomed us with in terms.

The driving position is a hybrid, combining the brand's well-known commanding asset with one that is more suitable for a on-road performance orientated vehicle. However, if you really start taking advantage of the 240 hp of the car, you'll find the seats a little but lacking support. You can order the optional sport seats for that, but we hadn't had a chance to test them yet, so we can't tell you is that's a good idea or not.

The space in the back is a pleasant surprise - the three-door version we tested has the exact length as the five-door one and two adults can sit comfortably in the back, even on longer trips.

So then, since we're speaking about a compact car, the compromise must have been done in terms of luggage space, right? Wrong. The boot is also surprisingly large, mainly due to the fact that its upper edge, where the windows start, is placed very high.

This is also the clue that reveals the area in which the price for all those assets is paid: rear visibility. In fact, the lateral visibility is also below average, but this seems like a small price to pay for the vehicle's concept-like looks, once you get used to it.

All in all, the interior is surprisingly spacious and just as special as it should be for the beefy price of the Evoque.

Let's be honest: the Evoque is not a Range Rover. At 172 in (4369 mm) long, it could be and, for this chapter, this is brilliant. You can cruise around the city just like in your average hatchback.

The hefty ground clearance allows you to neglect road imperfections, but the suspension doesn't, especially if you have the 20-inch rims everybody wants.

The petrol version we tested has enough grunt to allow you to do anything you like inside the city. However, you will find yourself oscillating between the "drive" and "sport" modes of the otherwise excellent ZF six-speed transmission, as the first brings a slight delay in case of "emergency", while the latter makes things too tense for everyday driving.

The visibility will take quite some time to get used, as the high and compact glass area has its price. As for the optional rear parking camera, it's a must.

The fuel consumption for this top version fitted with the 240 hp 2.0-liter turbocharged engine sits at around 15 liters per 100 km (15.6 mpg) inside the city, but this doesn't seem so much if you consider that it's about the same as what you get in a hot hatch, which is around 700 lbs (300+ kg) lighter.

Don't be fooled by the high loading area, shopping will be fully covered by the generously-sized luggage area. But your wife doesn't need to buy anything else. Once you're in an Evoque, all eyes will be on you and her.

We've been asked the same question from the first day we set foot on the Evoque's pedals: how does it handle off-roading? We can't help it wonder how many units of the car will actually get mud inside the engine compartment like the one we tested. Since the answer is single-digit percent, we'll start with the on-road part of this chapter.

The Evoque we tested was powered by a Ford EcoBoost 2.0-liter engine that delivers 240 hp and a peak torque of 251 lb-ft (340 Nm). a hothatch-arian engine. This is no metaphor- any stretch of asphalt traveled in the Evoque Si4 will convince you that you are driving a hot hatch.

Yes, the automatic torque converter gearbox isn't quite what you'd find in a go-fast hatchback, but the guys over at a shop called ZF managed to make it feel sporty when this is required. For example, the steering wheel paddles actually work, whether we're talking about upshift times or double downshifts.

The engine-gearbox couple somehow manage to fool the 3,600+ lbs of the car (1650 kg) of the car, convincing them to go faster than the power-to-weight ration suggests they should. You get a swift start if you play with both pedals, a 0 to 62 sprint time of 7.6 seconds and good in-gear acceleration times.

However, as you pass into the right half of the speedometer, the laws of physics start to surface and the car starts to lose its agility. The acceleration is still good, but the top speed only sits at 130 mph (210 km/h).

The suspension is pretty stiff (although in the soft to medium area if viewed through hot hatch segment lenses) and. together with the four-wheel-drive system, invites to push the car ever harder through the bends.

As for the brakes, these deliver much more stopping power than you expect if you judge them by their 20-inch covers, which really make them seem undersized.

When you drive this car full throttle, it feels fast and sounds like it should. The considerable weight disadvantage compared to an actual hot hatch, as well as the seriously higher center of gravity means that you won't get that extreme experience, but you do get surprisingly close.

However, unlike in a hot hatch, which is pretty tense most of the time, the Evoque become a relaxed cruiser once your right foot does the same, with the exception of the suspension, which remains too firm for a luxury car. However, this problem should be solved by the adaptive dampers, but you'll have to pay extra in a car that's already pretty expensive.

The Evoque can go off-road. It has the looks of a proper coupe and 20-inch rims, but it has also learned a few tricks from its big brothers. Even though it can beat most of its competitors in terms of rough terrain tackling, it won't do this effortlessly and the feeling is also being sent to the driver.

We drove the standard suspension, not the adaptive one, and we can tell you that this one is much too firm for off-roading. The Terrain Response and the SUV-like ride height do their job fine, but you'll be thrown around pretty violently if you take things too far.
Next page
12
67user rating 37 votes
Rate this car! 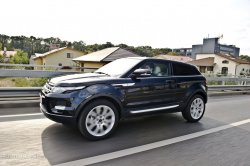 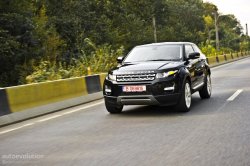 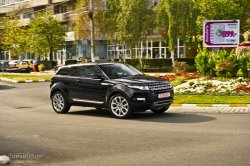 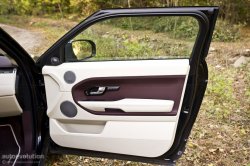 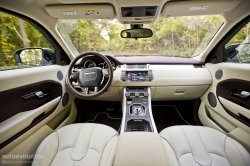 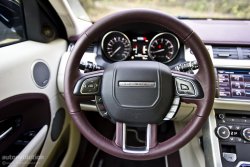 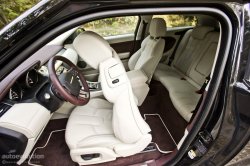 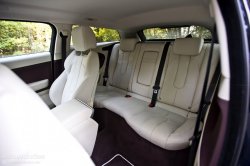 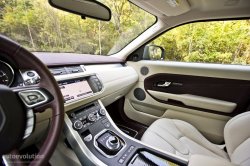 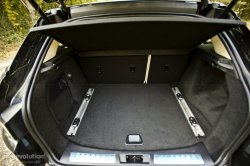 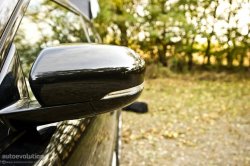