In today's car world, where crossovers are soon to become kings and the market's saturation for this segment is like salt to the Dead Sea's waters, Mazda decided to come up with a compact crossover that's less generous in size than the recently facelifted CX-5: the 2015 Mazda CX-3.
Yes, smaller (168.3 in long, 69.6 in wide and 60.7 in tall) because the CX-3 is underpinned by Mazda's tiniest player, the Mazda2 supermini we tested some time ago. This means the newcomer Mazda CX-3 has to face the likes of Nissan Juke and Honda HR-V, but also Peugeot 2008 and Renault Captur. Naturally, we wanted to know if the CX-3 has what it takes to make a name for itself in the rapidly-expanding small SUV niche.

You see, in the car industry as in many other fields of activity, older doesn't necessary mean better. With the Mazda CX-3, we're looking at a new model that once thrown in a very competitive stage, had to give its best shot in every department.

Let's start with the exterior, although this is not the chapter I will insist the most on, as much as I'd like to. I mean, just have a look at the Mazda CX-3 from any angle you wish and see if you can find a soft spot in the design. That's right, you can't because Mazda's ambitious KODO philosophy created a good-looking car with a young and fresh vibe about it.

You'll spot styling cues taken from both the CX-5 and the Mazda2 hatchback, mostly focused on the brazen trapezoidal front grille and audacious shapes, one or two levels up from what we typically see in the car's competitors. There's also room for ruggedness in Mazda's CX-3 appearance resumé, thanks to a jacked-up ride couple with black plastic cladding up front, in the back and around the wheel arches. The overall feeling is compact alright, but that's because the CX-3 rests its components on the same foundation as the Mazda2.

Since I've mentioned 'compact', now is a good time to turn our attention towards the interior. Although Mazda advertises the CX-3 as a five-door crossover SUV, it's more of a car suitable for just four occupants, if you want to keep comfort at acceptable levels.

Visually speaking, the cabin is identical to what Mazda2 offers. There's an upmarket feeling around the cabin, and here I include both the most visible areas inside and those hidden spots that don't come too often in contact with the user's eyesight. However, that won't fool anybody since the overall material quality is above premium, and all you need to do is use your tactile sense to spot that aspect.

The test model had leather inserts on the doors and partially on the seats, accompanied by copy-cat carbon fiber for the steering wheel and dashboard, a mix that to be honest, kicks Piano Black’s ass on any given day. We hope Mazda's competitors are reading this, especially Renault and Peugeot. It's also worth mentioning the car we tested came equipped with the Revolution Top trim level, which explains the enhanced attention to details.


In case you were wondering where the real leather is, we'll answer that right now: on the steering wheel, handbrake and gear selector lever.


The dashboard looks clean but not simple, yet stylish, regardless what seat you're traveling in. I personally enjoyed the instrument cluster setup, with the big rpm gauge in the middle and the complementary small-sized digital speedometer. There's a BMW flavor in the steering wheel's shape and configuration, as well as some Audi or Mercedes DNA dust in the pattern of the round air vents.

Ever since you set foot onboard the Mazda CX-3, you'll notice the high driving position. It's a good thing when you actually get a good panorama on the car's extremities, in particular for the daily urban brawl, and Mazda CX-3 provides that. Because of the top-shelf equipment package, the seats came dressed in white leather and white Alcantara. Throughout the test, their shape kept my back in a comfortable and commanding position, although I would have liked more lumbar support as well as a tad more lateral brace, but that's the only (minor, for some) drawback I could find for the front seats.

Sound proofing is done by the book, and it keeps your ears away from engine noise both in and around out of the city. Although not as refined as the HUD seen in Bavarian models, Mazda's retractable version is a more than decent choice. You get info on the car's speed, but the tiny plastic screen can also display alerts sent by the lane-keeping assistance function.

The MZD Connect infotainment system is managed via a seven-inch tactile screen placed on top of the dashboard, where it should be in the first place. It is also tilted towards the driver, kind of ignoring the passenger but at least you don't have to take your eyes off the road ahead for too long if you’re sitting behind the wheel; the graphics offer large icons, and the same goes for font size. Overall, the experience with the display is free of annoying glitches and freezes, although you should expect a bit of a lag from time to time, when selecting stuff on the screen. Also, the sound experience is enhanced by the seven-speaker BOSE audio system.

However, lagging behavior is easily fixed when you decide to use the controls positioned on the center column, again, with some similarities to BMW's iDrive controller.

In the back, things are looking decent in the leg space and headroom department, as long as you're 1.80 meters (5' 11") tall or less. Although there's more room inside compared to a Nissan Juke, more than two people on the back seat will feel like the fifth wheel of a car, so four people at most is the best formation you'll want to adopt without compromising comfort.

Some might feel a bit confined in the back, but that's due to the small Mazda2-derived platform and relatively minute windows in this sector. Moreover, you can still use the CX-3 as a family car: two children or two short folks seated in the back is something the compact crossover can take care of without a fuss.

The boot puts 350 liters of cargo space on the table, which is just four liters under the Nissan Juke. Therefore, it's not what you want and need for a long family road trip, but it's enough to serve well in the city as well as during short escapes, provided you're not very generous with the luggage. In other words, use backpacks as much as possible.

Even if the load lip is high, the trunk has a practical shape. Also, it comes with a false floor that can be lowered or raised, either for extra space or to build a flat surface when the 60/40 split rear seat is folded.

In the US, Mazda CX-3 can be had with a SKYACTIV-G 2.0-liter engine coupled exclusively to a six-speed automatic gearbox. The unit is good for 146 horsepower and 146 lb-ft (198 Nm) of torque. Europeans, however, can choose between three engines: the petrol SKYACTIV-G 2.0 in two power versions and the new SKYACTIV-D 1.5 clean diesel.

Our test car was fitted with the 1.5-liter diesel mill delivering 105 horsepower and 199 lb-ft (270 Nm) of torque, managed by the six-speed automatic gearbox. According to Mazda, this setup is the one you want for a balance between fuel efficiency and performance.

The diesel is fairly quick to respond from low revs because the maximum torque is delivered between 1,600 and 2,500 rpm. That translates into smooth mid-range acceleration, although filling the car with luggage and passengers has a detrimental effect on the otherwise crisp response from the engine, making it fade and become rather lazy. The same diesel engine is available on the Mazda2, but the supermini weighs 1,040 kg (2,293 lb), while the AWD CX-3 with the auto gearbox and the same engine tips the scales at 1,370 kg (3,020 lb).

Also, take it too much out of its comfort zone and the noise produced by the mill will reverberate intensely inside the car, but without annoying effects.


As I expected, the CX-3 proved to be agile and very cooperating in terms of handling.


Strolling the car through urban traffic or city-connecting roads is done in a pleasant way, something that reminded me of the Mazda3. The electric-assisted steering is light and accurate but lacks feedback and feels quite synthetical. This partially changes as speed goes up: the steering hardens and becomes more precise; a reassuring response when you're traveling at superior speeds on the highway, for example.

The suspension setup is biased towards comfort, which means the car is not as rigid as its bigger brother, the CX-5, but sturdy enough to grant the driver with enthusiastic turn negotiation credits, to a limited extent. The i-ACTIV AWD system comes in handy on wet surface, but once you start aiming at the car's limits understeer is bound to make an appearance in small doses.

Body roll also takes its toll in tight corners, but in normal situations, you wouldn't drive the CX-3 like you stole it. In any case, the suspension does a good job in keeping the car on the ground if we take into consideration the high stance of the vehicle.

Decent AWD performance on asphalt won't turn the CX-3 into an offroader. The car is what we like to call a soft-roader. In other words, it will serve you well on rough roads, even when there's no asphalt to comfort you and mud can be found in thin layers. But put the CX-3 on rocky paths or mud-flooded trails and you'll meet its limitations in this area.

In normal circumstances, the ride provides the comfort you want, except for those moments when you hit a pothole or find yourself on a rougher patch of road. It will also send some thumping noises inside the cabin, but it's worth mentioning our test car was rolling on big 18-inch alloy wheels that amplified every bump we ran over.

I can't find any flaws in the way Mazda's six-speed automatic gearbox handled the engine's potential. It's not the quickest to downshift once your foot holds the accelerator down, but it isn't less efficient than Volkswagen's DSG or Ford's Powershift transmissions.

As an alternative, you can use the paddles on the steering wheel for a better control over the shifting aspect.

Official consumption figures tell us Mazda CX-3 will drink 5.6 liters of fuel every 100 km (42 mpg) in urban areas while outside the city and combined values stand at 4.9/100 km (48 mpg) and 5.2 l/100 km (45 mpg), respectively. As good as it might sound on paper, that's far from what we got in real life conditions, despite the efforts of the i-STOP automatic start/stop system.


Just like the Mazda2, the CX-3 crossover puts safety on a high pedestal.


For that to happen, Mazda fitted their small crossover with a lane-departure warning system, blind spot alert feature as well as smart city brake support. All in all, the CX-3 is one of the safest crossovers out there.

To sum up, we're looking at a crossover that costs more than the average price tag in its class. However, you still get the same amount of practicality as its rivals offer, but with superior dynamic capabilities to top everything off.

Indeed, functionality is not what Mazda CX-3 brags to offer, but it compensates with driver-oriented behind-the-wheel experiences and a focus on young, active clientele. Looks are also a plus, as well as the safety features package. It's not the cheapest small crossover available on the market, but it's by far the best to drive, and if you ask me, that's what the fast-dilating compact crossover segment needed.
74user rating 27 votes
Rate this car! 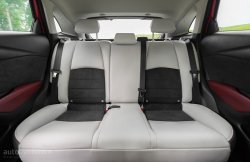 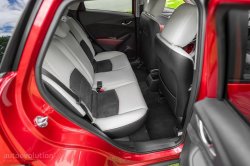 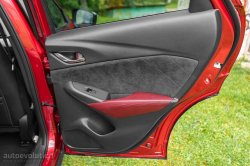 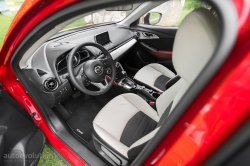 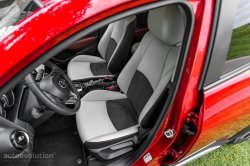 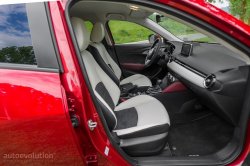 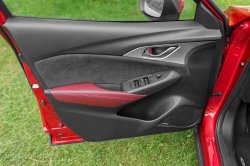 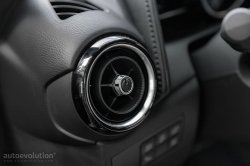 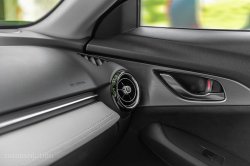 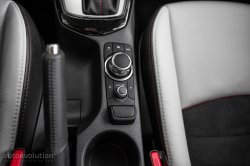 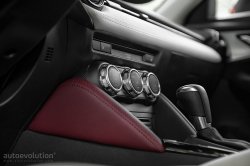 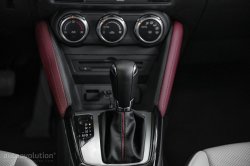 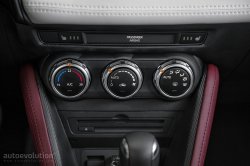 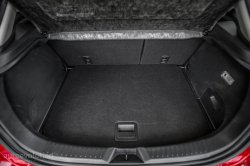 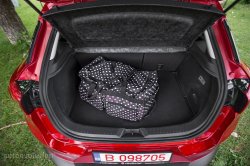 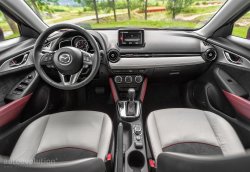 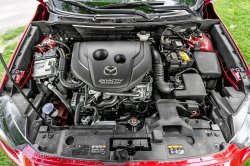 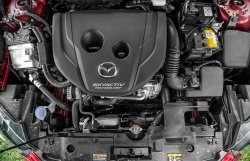