Enzo Ferrari liked his road cars with the engine up front and the driven wheels at the back. The Ferrari F12 follows this recipe, raising the stake with the “Berlinetta” designation. This is a pretty important particle for Ferrari, since the company was the one to make this name important some 60 years ago.

But nowadays Ferrari is caught up in the marketing game, coming up with amusing designations such as “LaFerrari”. This commercial focus of the brand leads us to wonder whether the F12 Berlinetta is a car that Enzo would enjoy.

Of course, it would be impossible for the F12 to use the man’s no-compromise approach. Nobody but racing drivers would buy one. But the idea is to see whether the F12 pushes things further by a stellar distance. If it manages to reign above all, the way Enzo liked to dominate.

To answer this, we packed our stuff and headed out to spend some time with a Ferrari F12 Berlinetta. Our tester must’ve had the glossiest shade of dark paint we had ever seen. This seemed brilliant but, as we would soon find out, the happiness would only last until the first specs of dust landed on the car.

As we opened the bonnet to get a better view of that low-mounted V12, the sky must’ve thought the engine needed some extra cooling. So rain started to came pouring down. It soon stopped, but it was enough to ruin the cleaning the car had just received.

We couldn’t complain though, as the V12’s starting noise gifted us with enough pleasure to withstand any storm. We would meet the rain again later in the day, but the sun made sure we could give this Ferrari a proper test meanwhile.

Gone are the days when you could look at a Ferrari and feel like you’re in an art gallery. Nowadays aerodynamics dictates everything. Even so, the F12 Berlinetta manages to be as sexy as its name. We’re not here to judge images, but we can tell you that the F12 is even more appealing in the flesh aluminum.

Get face-to-fascia with a Ferrari F12 in a bright color and you’ll see that you don’t necessarily need Lamborghini’s edgy styling to impress. The cues you see on the F12 come from both Pininfarina and Ferrari’s Styling Center. Naturally, Pininfarina focused more on the face of the car. But what you see is only a fraction of what you get with the Ferrari F12. The rest if all controlled airflow.

Aerodynamics is a pretty tricky discipline - you want your car to be streamlined, with a low drag coefficient, but you also want it to generate downforce. To achieve both, you need aerodynamic efficiency. Well, the F12 is the best Ferrari in history when it comes to this, being double as efficient as the 599.

As soon as the air hits the nose of the Ferrari F12, the car starts playing tricks on it. Those air intakes on the corners of the front fascia are active. Whenever the front brakes need cooling, these open up to serve.

The rear buttresses of the 599 have migrated to the front of the car. Just ahead of the windshield, we now find an aero bridge. The air flows past the hood and is then sent to the sides of the car through what are actually twin aero bridges.

The proportions have also changed a bit, as the rear overhand was trimmed by a massive 3.2 inches (82 mm), while the front one is 2.5 inches (65 mm) larger.

Ferrari’s F12 ends with a pair of round lights. While this is a surprising as Bugs Bunny playing tricks on Elmer Fudd, the taillights still an absolute joy to behold. Below, sits a pretty complicated diffuser, as well as an F1-inspired fog light.

Opening the door of our test car, we discovered that somebody had spilled cognac all over the interior. Nobody had actually spread any drinks around the cabin, but the calm shade of the leather and Alcantara gave us this impression. A good start then.

It would’ve been possible to see less, since the Ferrari F12 shares the base trim problem with the Lamborghini Aventador - leave the cabin in standard configuration and it won’t seem worthy of a car that costs this much.

Mainly because it only holds two occupants, the Ferrari F12 Berlinetta is generous with them. There’s plenty of space all around, as well as enough stowage compartments to please a high-maintenance girlfriend.

Right behind you there’s a generous rear shelf and you can fold a separator to communicate with the boot. Lower this and the luggage capacity goes from 11.3 cubic feet (320 liters) to 17.7 cubic feet (500 liters). Again, a nice treat.

Then there’s the visibility. Despite the lowered seating position compared to the 599, the Ferrari F12 is rather good when it comes to this. As a result, it’s miles ahead of the Lamborghini Aventador when it comes to being accessible to the driver.

For anybody that’s been in a Ferrari 458 or an FF, the interior of the F12 Berlinetta doesn’t bring any major surprises. For example, Maranello’s fetish for a small gearbox control console on the center of the car is still here. So are the door handles that trick you into believing they’re window switches.

The newest element here is the set of air vents. Made from carbon fiber and aluminum alloy, these immediately show their noble aeronautical inspiration. They’re also easy to use and so are the rest of the controls in the Ferrari F12.

We’ve said it before and we’ll say it again - the steering wheel is excellent if all you drive are Ferraris. But if you also spend your time in other cars, you’ll be confused when presented with a situation where you have to react quickly. The paddles are very sweet to look at though. And yes, all the space freed up around them makes them a delight to use.

The guy in the car behind us must be pretty upset right now. We spent quite a few seconds stopped at a green traffic light - we failed to notice it had turned green because we were staring at the hood. The way in which the V12's heat rises through the vents is mesmerizing.

Don't worry fellow motorist, we've got 730 HP to recover the lost time. Usually, such a claim is followed by the car's stumbling, as this much power is never a good asset inside the city. Well, the Ferrari F12 is astonishingly easy to drive for its class. Like all current Ferrari supercars.

The steering is light and those huge carbon ceramic brakes are easy to modulate. Thus, you'll be able to do the urban dance with enough ease. Even the double-clutch transmission knows how to handle the frightening power of the V12.

Whereas a Lamborghini Aventador city drive intimidates its driver just as much as it scares pedestrians away, the F12 is a much more relaxed vehicle.

Don't label it as a Fiat 500 replacement though. When you're barely moving along with the traffic, in second and first gear, the exhaust sound a bit like a loud moose. The sound resonates inside the cabin, reminding us of the McLaren MP4-12C test drive.

And then there's the visibility. This may be decent, but don't expect to get the kind of conditions you need to power your way through an oncoming traffic jam.

However, the F12 doesn't make you look like a clown when parking. Just make sure you gift it with the all-round cameras.

It's still a bit frustrating to drive the Ferrari F12 through the city every day. But the point is that you can.

We’re a bit dizzy right now. That’s what happens when your brain gets confused - how else could we feel when the Ferrari F12 is sending out mixed messages? One moment we’re out there at 8,250 rpm, racing a biker who’s crazy enough to do this in the wet. Then we split ways with the insane leather guy and the F12 cruises along like it’s some sort of luxury sedan.

When you just want to cruise your way to the destination, you can simply leave the thing in fifth gear. Don’t worry, you’ll have plenty of pulling power, since 80 percent of the peak torque arrives at 2,000 rpm. The double clutch transmission at the back of the car plays along smoothly if you’re light on the gas. This is true even in the more aggressive manetinno modes.

Yes, that little red devil switch on the steering wheel is still the master here. And boy does it control some sweet hardware. Up from the aforementioned 2,000 rpm, the game is on. Once you’ve reached 3,000 rpm, the exhaust starts showing its character. Listen carefully and you’ll even hear some intake noise. Ferrari’s engineers have fiddled with the V12’s intake, but we would’ve loved to hear more of this.

However, when you go past 5,000, the F12 Berlinetta turns into a devil altogether. You’re catapulted towards the horizon and you can even get a bit of pain in your cervical area. We enjoyed this so we’re probably a bit masochistic.

It’s so pleasant to have all this firepower at your disposal and yet enjoy the linearity of the 6.3-liter naturally-aspirated V12. It all feels like you’ve got a good friend who assists you with whatever you need. And he’s the president.

Despite being front-engined, the Ferrari F12 concentrates 54 percent of its mass over the rear axle. What’s more, its center of gravity sits 1 inch (25 mm) lower than the 599’s one. However, there’s really no way of comparing the two.

The F12 doesn’t just feel faster, is also considerably superior in terms of response. This car doesn’t quite know what body roll means. And its ride is comfortable too, even without activating the “Bumpy” mode.

The road’s dried up now and the sheer grip form the Michelin Pilot Sport rubber is amazing. Where a Ferrari 458 slides, the F12 just hugs the road and goes. This is a much more mature proposition.

We were a bit surprised by how quick the steering was, even for a Ferrari. It’s brilliantly loaded with feedback, but a bit light for our taste. We’re truly pleased, but we still prefer the Lamborghini Aventador’s setup.

The control in the Ferrari F12 is nothing short of superb. Once you reach the higher areas of the manetinno, the transition into oversteer is extremely elegant. The rear diff and Ferrari’s electronics mean that you steering inputs while the car is sideways are much more easily obeyed than you’d expect.

And the brakes are just as impressive. They’re so easy to use that one could be forgiven for never knowing the F12 uses carbon ceramics. However, when you do dip into their potential, the massive stopping power is a constant.

Staying in the comparo department, we have to explain that everything in the Ferrari F12 feels more direct than in the FF. Must be the lack of the extra seats.

And when pitted against the Aventador, the Ferrari F12 wins, even though some of us hate to admit it. The F12 never manages to reach the Aventador’s bravado factor. It doesn’t put on as much as a show. But it comes close and it’s significantly more usable. The Ferrari F12 also feels more agile than the Lamborghini Aventador. The childish desire to have both is probably the best way to treat this matter.
Next page
12
90user rating 53 votes
Rate this car! 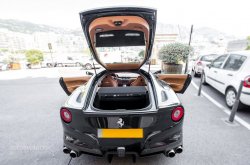 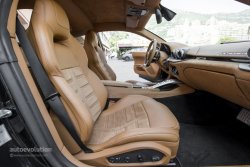 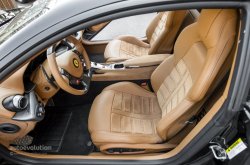 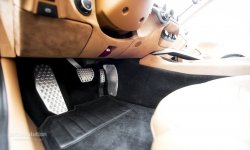 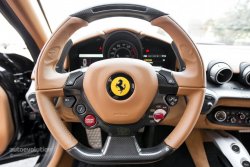 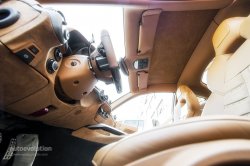 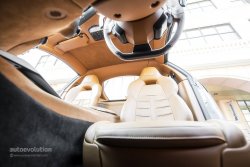 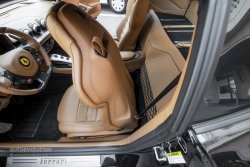 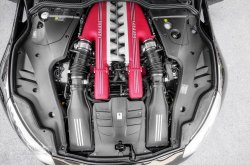 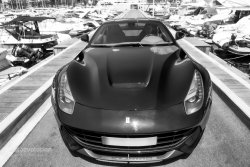