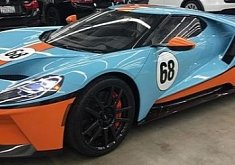 11 May 2017, 15:26 UTC / If you’re looking for a fancy modern little 50 cc scooter, look no further than Peugeot’s Speedfight model which will come in two special edition setups

3 Feb 2017, 17:24 UTC / Convincing a cat to go ride with you on a motorcycle seems next to impossible, but this guy managed to ride with two. He's the cat god

27 Jul 2016, 14:53 UTC / The NHTSA has issued a recall for the new Kawasaki Z125 Pro with some units having been fitted defective shock absorbers

BMW G310R European Price Announced, Still Waiting for the US One

29 Jun 2016, 13:03 UTC / BMW Motorrad announced the base price for their debut small-displacement machine, G310R, as well as a list of optional accessories available

Suzuki EXTRIGGER Is the Electric Response to the Honda Grom

15 Jun 2016, 15:20 UTC / Suzuki patents its EXTRIGGER electric bike and this might mean that we're in for yet another choice in the small-displacement segment, albeit and electric one

1 Jun 2016, 11:49 UTC / Ducati prepares a special edition Scrambler Shocking machine to kick off the World Ducati Week 2016, and has it painted in a striking pink color

BMW Starts a New Marketing Campaign for the G310R

13 May 2016, 14:42 UTC / BMW is preparing the field for the G310R, their first-ever small-displacement machine, and here's the new commercial that offers a new perspective on bikes

12 May 2016, 15:03 UTC / The tides are high for BMW Motorrad as the Bavarian manufacturer announces the opening of a new factory in Brazil, one of the strong emerging markets

10 May 2016, 08:08 UTC / A Pakistani designer brings the Vector trike concept, a car-motorcycle hybrid that has excellent chances of becoming a new autocycle