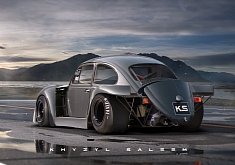 Massive Fire Destroys 422 Cars In Portugal, Nobody Got Hurt

17 Jul 2016, 12:21 UTC / Alastair Moffatt, Guinness World Record holder for tightest parallel park, will be present at next month's Mini In The Park event. He has some stunts planned

6 Jul 2016, 14:28 UTC / A woman finds parallel parking harder than deciphering the hieroglyphs as she struggles to squeeze her Opel Corsa into a spot that could have taken a large SUV

30 Jun 2016, 08:33 UTC / A 19-year-old got upset with bureaucracy over a parking ticket, and developed a system to fight the fines. He then published it online for anyone to use

22 Jun 2016, 16:29 UTC / A few veterans from Apple have started a company called Pearl. They make accessories for cars. Their first product is a $500 rear-view camera

Starting With iOS 10, Apple Maps Will "Know" Where You Parked Your Car

15 Jun 2016, 11:13 UTC / According to those that have installed the developer version of Apple's iOS 10, the updated Apple Maps app will remember where you parked your car

8 Jun 2016, 12:34 UTC / Technology is great and all that, but even though autonomous cars might reduce the number of accidents, humans are still better at parking

6 Jun 2016, 11:08 UTC / One picture of a Tesla Model X parked across three Supercharger stations has irritated the members of the Tesla online community beyond recognition

2 Jun 2016, 09:37 UTC / Sexism is a problem in most parts of the world, and China makes no exception. Authorities in Hangzhou have created female parking spots and sparked online rage

25 May 2016, 13:33 UTC / The irony of a police car being at the receiving end of a traffic violation ticket cannot be ignored, but sadly, it can be overruled by the authorities

24 May 2016, 15:19 UTC / All those people who, for one reason or another, don't have parking sensors on their cars and are complete failures at parallel parking can now rejoice

24 May 2016, 10:56 UTC / A Chinese woman does what we all wish we'd have the balls to do when returning to our car only to find it blocked by an inconsiderate driver

Parking Your Car on a Frozen Lake Is a Bad Idea, 15 Owners Find Out the Hard Way

7 Feb 2016, 15:48 UTC / Visitors of Wisconsin's Winter Fest witnessed how 15 cars sank in Lake Geneva after the ice they were parked on cracked. Nobody was hurt

6 Dec 2015, 15:33 UTC / There's probably a reason why one man is driving and the rest are sitting in the passengers' seats, and this balance should not be tinkered with

29 Nov 2015, 15:25 UTC / Considering how expensive buying land is, you'd think business were highly motivated to make the most out of what they own, instead of wasting it