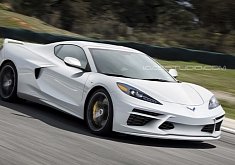 Stories about: nikola one

Home > News > Stories about: nikola one

10 Dec 2021, 19:54 UTC / While Trevor Milton is being sued for making a truck with no motor descend a slope as if it did, Tesla got no backlash for presenting an AV that never was

30 Jul 2021, 09:11 UTC / The U.S. Attorney’s Office New York indicts Milton over his false claims that boosted Nikola stock before and after the SPAC merger

Yes, Nikola and Trevor Milton Lied Through Their Teeth

28 Feb 2021, 07:35 UTC / The claims made about the Nikola One prototype were either completely false or exaggerated, the findings of an independent internal review show

The Nikola One Trevor Milton Designed in His Basement, Maybe Bought from Rimac

29 Sep 2020, 04:14 UTC / New report claims Trevor Milton met with Rimac designer Adriano Mudri in 2015, was fully aware of a design for a semi called “Road Runner.” It later became One

Nikola NZT Electric Buggy Shows Up in Public, on the Muddy Tracks from 2021

28 Jan 2019, 10:11 UTC / Nikola CEO urges fired Tesla employees to give his company a chance and quickly promises to review those bold enough to try and get a job

6 Nov 2018, 15:19 UTC / Nikola Motors shows the first images of its third concept truck, the Tre, and says it will be showing it next year in Phoenix, Arizona.

Tesla Sued by Nikola Motor for $2 Billion on Patent Infringement

17 Aug 2017, 10:14 UTC / What's likely to be the first product to come to the market from Nikola Motor promises to have dizzying amounts of torque and more than decent performance

Nikola Motor Unveils the Nikola One Truck, Insists It's on Course to Deliver

2 Dec 2016, 14:10 UTC / The zero-emissions truck startup is continuing on the long and sinuous path it has laid out in front of it toward the Nikola One fuel cell semi truck

Watch Out, There's a New Tesla in Town and It'll Sell This Electric Semi

10 May 2016, 21:32 UTC / A new startup bearing the other name of famous inventor Nikola Tesla is trying to convince us to make a deposit for the EVs it wants to build