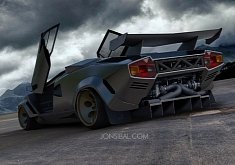 19 Aug 2022, 13:21 UTC · By: Razvan Calin / The universe of the two-wheeled human-powered transportation is home to some unique - and sometimes intriguing - laws and regulations

24 Mar 2022, 20:24 UTC · By: Florin Amariei / NASCAR’s done with letting teams get their own way. The racing body announced a heavy penalty today for RFK that’s comprised from multiple sanctions

Scania Fails To Wiggle Itself Out of a Huge Fine

10 Feb 2022, 17:04 UTC · By: Florin Amariei / If everything else fails, get creative. Scania tried it with the European authorities. Unfortunately, they’ll still pay the sum owed for what they’ve done

Driver Receives Fine for Passing Through Clear Air Zone, He Was 145 Miles Away

6 Jan 2022, 14:09 UTC · By: Monica Coman / There are a lot of justified fines out there, and legal forces are trying to keep drivers as civilized as possible. But sometimes they make mistakes

Woman Gets Fine for Eating Ice Cream While Driving, Police Thought She Was Texting

22 Dec 2021, 10:52 UTC · By: Monica Coman / Imagine receiving a fine for using your phone when driving, except you weren’t. And you find out it was for eating ice cream

2 Dec 2021, 17:07 UTC · By: Monica Coman / One of the worst things about visiting a crowded place, like the mall or a stadium, is parking space. And this family got a fine for not finding a parking space

4 Nov 2021, 10:17 UTC · By: Bogdan Popa / Drivers in Swindon claim it’s the navigation app the one that causes them to get multiple fines after entering a bus-only lane

19 Oct 2021, 06:29 UTC · By: Elena Gorgan / Technology gone unchecked: couple receive fine in the mail for driving in the bus lane, alongside a photo of a woman walking there

Man Fills Up His Car With Beer Cans, Secures Meeting With the Police

9 Aug 2021, 20:51 UTC · By: Florina Spînu / A man decided to fill his car to the brim with empty beer cans and proceed to drive on a highway in Ontario, Canada. The police was not happy.

12 Sep 2019, 13:37 UTC · By: Elena Gorgan / Richard Keedwell says that after 3 years he’s stressed out, disappointed and filled with regret at having spent so much money seeking justice that eluded him

Porsche Fined Half a Billion Euro, Gets Off the Hook in Dieselgate

7 May 2019, 14:05 UTC · By: Daniel Patrascu / Stuttgart Public Prosecutor's Office issues a €535 million fine for Porsche, on account on its involvement in the Dieselgate scandal

8 Apr 2019, 09:11 UTC · By: Daniel Patrascu / BMW says a significant EU fine into an ongoing anti-trust investigation is probable, as in more likely than not. Carmaker plans to fight EU's decision

Volkswagen Could Pay Damages to Consumers After Being Sued in Germany

2 Nov 2018, 13:07 UTC · By: Daniel Patrascu / The Federation of German Consumer Organisations (VZBV) files a class action suit against Volkswagen as soon as the law allowed it

16 Oct 2018, 11:45 UTC · By: Daniel Patrascu / Audi fined 800 million EUR ($926 million) for trying to trick emissions tests. The carmaker will not fight the decision and admitted wrongdoings

4 Sep 2018, 09:50 UTC · By: Daniel Patrascu / German prosecutors slap a tiny fine of 10 million euros on BMW for incorrectly allocating a software to some of its cars.

9 May 2017, 11:10 UTC · By: Sebastian Toma / A precinct from New Hampshire caught a driver who had made a set of fake inspection stickers from cheese wrappers and newspaper clippings. It did not go well