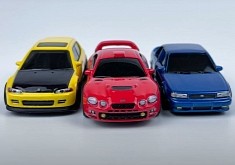 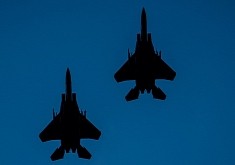 16 Nov 2021, 10:56 UTC / What do glass and metal smell like? Checkmate is an interesting advertising tool for Russia's latest fighter, said to be inspired by the aircraft's smell

12 Nov 2021, 07:18 UTC / The mighty Checkmate and powerful Su-57E aircraft were demonstrated side by side for the first time, in a single static display

21 Oct 2021, 04:28 UTC / The remarkably-advanced KF-21 is the first fighter jet developed and built by South Korea, and the most expensive military project in all its history.

4 Oct 2021, 18:37 UTC / As the Project Aces team continues to celebrate the 25th anniversary of the Ace Combat franchise, a squad of new aircrafts will be deployed this fall

F-35s and F-15s Fly Over HMS Queen Elizabeth, They Look Like a Close Pack of Hungry Wolves

24 Sep 2021, 09:16 UTC / The U.S. and UK have been training together in the Pacific last month, exercises a great opportunity for photographers to snatch incredible shots

20 Sep 2021, 07:10 UTC / The plane would serve with distinction in the fledgling Yugoslav Air Force until the mid-1970s. Then plane was transferred to the Museum of Aviation in Belgrade

15 Sep 2021, 10:09 UTC / Russia's fighters and bombers go all out during a massive joint exercise, including a spectacular air strike that showcased the latest weapons and technology

10 Sep 2021, 07:42 UTC / For such a jet fighter as aged as this one, it’s served a relatively peaceful life in military service. Logging only 818 total flight hours since new.

31 Aug 2021, 09:43 UTC / Some of the most famous Russian fighters, bombers and assault helicopters are put to the test during the final stage of the International Aviadarts competition.

29 Aug 2021, 00:16 UTC / The famous fifth-generation fighter jets are taking center stage in the U.S. military, but behind the scenes, this trainer jet is about to be just as awesome.

Russia Leaves Checkmate in the Shadow, Bets on the SU-57E Fighter for Foreign Appeal

16 Aug 2021, 11:33 UTC / Russia is tempting the foreign market with not just one, but two next-generation fighter jets, but doesn't seem to have funds for its own.

11 Aug 2021, 09:48 UTC / A F-35A Lighting II deployed with the plane's demonstration team was captured in a still as it flew over Tacoma, Washington, at the beginning of July