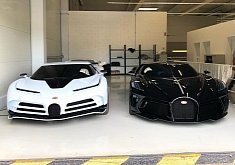 6 Oct 2022, 10:30 UTC · By: Gustavo Henrique Ruffo / The airbag problem had not been disclosed before because Toyota would have only learned about the issue in the last month or two.

26 Aug 2022, 12:51 UTC · By: Gustavo Henrique Ruffo / All car manufacturers have to send the Chinese Ministry of Industry and Information Technology (MIIT), and we already know a lot about the new EV.

In an Unprecedented Move, Toyota Offers to Repurchase bZ4X Units Affected by Recall

4 Aug 2022, 15:34 UTC · By: Cristian Agatie / Toyota recalled the electric crossover bZ4X because the wheels might fall off, but instead of a fix, Toyota is now offering to buy back the affected EVs

Another Toyota bZ4X Bites the Dust in Nevada, Its Owner Did Not Get the Chance to Enjoy It

2 Aug 2022, 14:39 UTC · By: Cristian Agatie / Another crashed Toyota bZ4X is selling on Copart, which is remarkable considering how very few of them were sold in the U.S. market

24 Jun 2022, 20:38 UTC · By: Mircea Panait / Toyota became aware of the loosening wheel hub bolts in May 2022 after an incident in Taiwan that saw the front left wheel separating from the vehicle

23 Jun 2022, 16:25 UTC · By: Gustavo Henrique Ruffo / The recall also involves 2,600 units of the Subaru Solterra, which is basically the same car only with a Subaru badge and minor differences.

23 Jun 2022, 15:51 UTC · By: Matt DeLorenzo / Despite being available as a hybrid and plug-in hybrid, the equivalent-sized Toyota RAV4 is nowhere near as eco-friendly as the new bZ4X electric crossover

12 May 2022, 14:04 UTC · By: Gustavo Henrique Ruffo / While the Solterra is mostly a rebadged Toyota bZ4X, the Japanese company realized it has to develop its own electric vehicles as soon as possible

25 Apr 2022, 16:57 UTC · By: Mircea Panait / Better named than the Toyota bZ4X, the Solterra is more expensive because it comes with standard all-wheel drive as you'd expect of a Subaru

Preparing to Be an EV Company, Lexus Now Wonders How to Manufacture Them

25 Apr 2022, 15:05 UTC · By: Gustavo Henrique Ruffo / Instead of talking about the cars themselves, Lexus is more concerned about the process – especially considering everything can change in the blink of an eye

24 Apr 2022, 01:07 UTC · By: Benny Kirk / As we all know, in the flesh, first impressions can often be the deal breaker as to whether someone chooses one model over another

Lexus Presents the RZ 450e, Its Version for the Toyota bZ4X

20 Apr 2022, 11:28 UTC · By: Gustavo Henrique Ruffo / The Japanese carmaker also praised the Direct4 system, which brings a description that is pretty close to what Nissan’s e-4ORCE wants to offer

2023 Toyota bZ4X Electric Crossover Launched in the U.S., Can You Guess the Price?

12 Apr 2022, 12:16 UTC · By: Cristian Gnaticov / The first units of the 2023 Toyota bZ4X will arrive at dealers nationwide soon, but in the meantime, the automaker has started accepting orders for the EV

Toyota Will Not Sell the bZ4x in Japan, Only Offer It Through a Subscription Service

24 Feb 2022, 09:07 UTC · By: Gustavo Henrique Ruffo / That makes Toyota’s strategy for electric cars more clear and reinforces what we said before: the Japanese carmaker is waiting for the right cells

2023 Subaru Solterra Reservations to Close on February 28, Still No Word on Pricing

14 Feb 2022, 12:18 UTC · By: Sebastian Toma / Subaru will reportedly close its reservation process for its 2023 Solterra at the end of this month. Its price is yet to be revealed

Lexus Reveals New Images of the RZ 450e, Its Version of the Toyota bZ4X

4 Feb 2022, 13:07 UTC · By: Gustavo Henrique Ruffo / If Lexus managed to get that sort of visual differentiation compared to the electric Toyota, what prevented Subaru from doing the same?