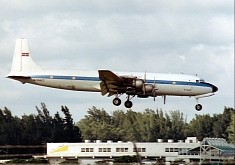 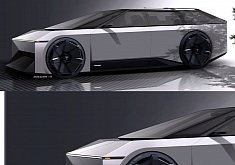 26 Sep 2022, 10:05 UTC / The sanctioned Russian oligarch reportedly played a key role in getting over 200 prisoners released in a swap, flew some of them on his private jet

13 Aug 2022, 06:23 UTC / Halo and Garcon have reached the safe waters of Turkey, where Eclipse and Solaris arrived months ago. They are officially out of reach for UK authorities

24 Jul 2022, 05:05 UTC / Superyacht Halo and support vessel Garcon were detained in Antigua in late March, after Abramovich was sanctioned. They’re now traveling together to Morocco

Sanctioned Megayacht Solaris Is Heading to the U.S., or Actively Trolling

28 Jun 2022, 08:28 UTC / Roman Abramovich’s smaller and less expensive superyacht has been docked in Turkey for months, is now displaying unlikely destination on AIS

Roman Abramovich's Son Cruises in an Austin-Healey 3000 in London

27 May 2022, 10:52 UTC / Earlier this month, the U.S. included the New Bandit on the list of airlines denied export privileges, which means it’s “effectively grounded”

30 Apr 2022, 06:19 UTC / Bermuda moves to remove registration for flag of convenience for Eclipse and other oligarchs’ superyachts, effectively rendering them illegal for sailing

21 Apr 2022, 13:25 UTC / Champions in their respective fields, Lewis Hamilton and Serena Williams plan to invest in owning Chelsea, together with Sir Martin Broughton

16 Apr 2022, 10:01 UTC / Roman Abramovich seems to hardly catch a break these days, and now, another property, his mansion in France has just been seized

12 Apr 2022, 15:58 UTC / There might be a sixth, “secret” yacht that belongs to Roman Abramovich, which shifted ownership right when Russia attacked Ukraine

9 Apr 2022, 05:51 UTC / How the mighty have fallen: the billionaire is feeling the pinch of the sanctions, turns to wealthy friends for financial help

5 Apr 2022, 06:53 UTC / Russian billionaire Roman Abramovich is trying hard to keep his superyacht away from the sanctions imposed by the U.S. and EU

22 Mar 2022, 05:31 UTC / A small group of Ukrainians boarded a motor boat and met Solaris as it was making its way into the Turkish port of Bodrum. They failed to block it

18 Mar 2022, 13:15 UTC / A man rented a boat with one purpose: to vandalize one of Roman Abramovich’s superyachts, Solaris. But he didn’t succeed

World’s Most Expensive Superyachts, Abramovich’s Eclipse and Solaris, Moving Out of Reach

17 Mar 2022, 04:37 UTC / Roman Abramovich has been included on international sanctions lists and was last seen in Israel. He is moving his assets out of the reach of authorities

10 Mar 2022, 15:40 UTC / A man of a certain lifestyle, Roman Abramovich has found himself slapped with sanctions from Britain, which seized part of his $2.6 billion assets

10 Mar 2022, 10:13 UTC / With Chelsea FC on the market in search of a new owner, billionaire Jamie Reuben has shown interest in it. He owns luxurious yacht

Abramovich Trying to Avoid the Seizure of His Luxury Toys, Including the $300M Private Jet

4 Mar 2022, 01:10 UTC / Did Roman Abramovich flee onboard his newest aircraft, the world's most expensive private jet? His whereabouts are unknown, and some of his assets are for sale

St. Barts Brings All the Billionaires to the Yard, Their Superyachts Are Bigger Than Most