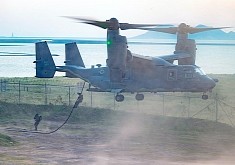 Fast-Roping Out of a CV-22 Osprey Is Dangerous Stuff, Made Easy by Special Forces

3 Oct 2022, 15:34 UTC / Lexus continues its partnership with Marvel Studios for the second installment of Black Panther: Wakanda Forever with the RZ 450e.

Marvel's Star-Lord Is Not Only Pumping Gas, but His Muscles As Well at a Gas Station

3 Sep 2022, 19:45 UTC / On a nice Thursday, Chris Pratt was filmed taking a quick workout with a few pushups while waiting for a fill up at a gas station

20 Jun 2022, 09:26 UTC / LEGO is celebrating its 90th anniversary, and as a result of that a wealth of details on upcoming brick toy sets were released

Spider-Man: No Way Home to Feature Special Appearances by the IONIQ 5 and Hyundai Tucson

22 Nov 2021, 15:26 UTC / Spider-Man: No Way Home is the first movie from the Hyundai-Sony strategic partnership, which will spawn additional marketing schemes for future films

When Not Saving the World, Here’s What the Avengers Drove in the MCU

18 Oct 2021, 21:15 UTC / Lexus has unveiled 10 vehicles inspired by the superheroes from the upcoming "Eternals" movie. The epic machines feature an otherworldly design

5 Oct 2021, 02:13 UTC / Lexus debuted with a new marketing campaign that features the hero from the upcoming Marvel movie "Eternals" behind the wheel of a IS 500

24 Aug 2021, 08:09 UTC / Spider-Man: No Way Home is set to be Marvel’s biggest movie release of the year as it introduces the Multiverse on the big screen

24 May 2021, 14:21 UTC / Marvel Studios released the first trailer to the "Eternals" movie, we get our first glimpse at the upcoming superheroes in the Marvel Universe

12 Apr 2021, 08:20 UTC / Made specifically for the charity auction, it’s based on the Royal Oak Concept in white gold; a limited series of 250 Marvel watches has also been launched

22 Jan 2019, 07:58 UTC / The most spectacular elements of the special edition are the custom daytime running lights that give out a unique lighting signature

10 Dec 2018, 14:05 UTC / NASA posted on its Twitter account this weekend its commitment to try and help locate Iron Man as a reaction to Avengers End game trailer.

18 May 2018, 08:20 UTC / HJC Helmets increases the number of Pixar-licensed motorcycle helmets to three with the addition of a Monsters, Inc. decal.

Ford's Ecosport Appears In Guardians of the Galaxy Vol 2, in Comic Books Too

11 Apr 2017, 16:12 UTC / Ford has announced that the EcoSport, its smallest SUV, will appear in the second volume of Guardians of the Galaxy movie. It will also appear in comics

HJC Helmets Adds Deadpool and Ghost Rider To The Lineup