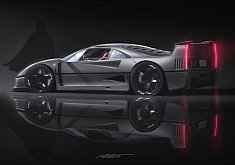 Infiniti’s QX30 Concept Is Bringing Sexy Back in Geneva

3 Mar 2015, 14:51 UTC / There’s some big movement in the premium crossover segment after Infiniti revealed the QX30 Concept at the 2015 Geneva Motor Show

3 Mar 2015, 14:15 UTC / he Agera RS pushes the boundaries and takes the Agera to all new levels of performance focusing more on weight and aerodynamics than straight-up power

3 Mar 2015, 13:44 UTC / It is the world’s first premium Multi Purpose Vehicle – the first premium seven-seater in the compact segment - according to BMW but we're not that sure

3 Mar 2015, 12:50 UTC / Mercedes-Mayach S600 arrived in Geneva and as we expected, it has the same royal, sober attitude found in Maybach's traditional DNA

3 Mar 2015, 11:53 UTC / Mercedes-Benz is running in beast mode in Geneva after the G500 4x4² off-road beast was officially revealed on the Swiss automotive stage

3 Mar 2015, 11:41 UTC / Park Lane is one of the most distinguished addresses in the British capital. MINI has a showroom there that is now being honored with a special model

2 Mar 2015, 22:50 UTC / Volkswagen Caddy had no problem in walking among superstars during VW's opening ceremony in Geneva, as the van reached it's fourth generation

2 Mar 2015, 22:47 UTC / Audi is presenting the new prologue Avant show car at the Geneva Motor Show, which gives another glimpse into the future of Audi design

2 Mar 2015, 22:46 UTC / Germany's best-selling MPV has been completely redeveloped. The Touran could be a revolution for the market, thanks to Passat and Golf features

2 Mar 2015, 22:09 UTC / At the Geneva International Motor Show, Bugatti is celebrating the Veyron, the fastest production supercar in the world with the La Finale special edition

2 Mar 2015, 21:19 UTC / Cayman GT4 is Porsche's bet at this year's Geneva Motor Show as the yellow devil made its appearance on the red carpet along with the new R8 and Aventador SV

2 Mar 2015, 21:14 UTC / The 20v20 has been shown in Geneva with cool design and very little information. But they did say it comes with everythin that made the Leon so cool

Aventador LP 750-4 Superveloce Is the Fastest Production Lamborghini Ever

2 Mar 2015, 21:06 UTC / The Lamborghini Aventador LP 750-4 Superveloce is without a doubt the coolest, fastest, most aggressive car that Sant'Agata Bolognese has ever attempted